Yikes! Ash and Bone isn’t Winter’s Bone, Rust and Bone, nor Bones and All, but you know from the title that this is going to be another dank, hardscrabble movie and indeed it is. Backwoods horror has been a dependable genre for decades now; Harley Wallen’s low-budget horror indie looks back beyond the multiple entries in the Wrong Turn franchise to go back to the roots of the mid 70’s and sacred texts such as Deliverance and Texas Chainsaw Massacre. While the low-budget is in evidence, and this doesn’t have the slickness of a Blumhouse entry, Ash and Bone is a horror film that has a unique tone and approach that’s worth dissecting for horror fans. 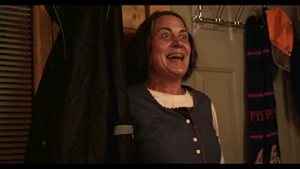 Wallen plays Lucas Vanderbilt, who heads out of the city to the tiny town of Hadley Lake with his partner Anna (Jamie Bernadette) and his daughter Cassie (Angelina Danielle Cama), an unwilling participant in this family holiday as per genre requirements. Tensions are obvious from the start, and when Cassie rejects her dad’s gourmet dinner of hot-dogs, she heads for the nearest dive bar to assert her own individuality. Cassie hooks up with a local couple and they decide to visit a local haunted property, the McKinley place, where they discover clear signs of a charnel house in regular use. Cassie makes it back to her family, somewhat chastened by what she’s seen, but the McKinley family take a dim view of the intrusion and head after the Vanderbilts to seek a bloody revenge…

‘Do I need to fill up an application or something? ’ Lucas Vanderbilt asks the owner of a local gun-shop as he attempts to find some weapons to defend himself. ‘You ain’t from around here, are you?’ comes the answer; this is a traditional story of city folk getting out of their depths with the restless natives. The McKinley’s are a fearsome bunch, led by patriarch (Jimmy Doom) and May (Erika Hoveland), both of whom are keen to ‘play with their food’ before they chow down on the interlopers. 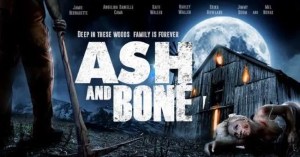 Wallen’s film is remarkably light on gore, so torture porn addicts should seek their kicks elsewhere; Ash and Bone doesn’t go for the usual gross-out tactics, but instead develops the relationships within the warring families, with Hoveland a stand-out in a uniformly well-organised cast. The twists and turns are nothing new, but the tension is genuine and Wallen’s ability to get the best from his actors marks him out as a talent to watch. Horror is a staple of youth audiences, and for those who don’t want to go straight to the deep end of extreme nastiness, Ash and Bone has plenty to commend it as a route-one evocation of age-old campfire horror tropes in traditional style.