Regular readers will know that I’m a major fan of Michael Mann, whose steely, detail-obsessed, immaculately shot and scored crime movies occasionally seem to catch a populist wave after the success of his game-changing Miami Vice tv show. His adaptation of Thomas Harris’ novel Red Dragon has a worse title (in a truly awful font), and takes a rather different approach to the later films that featured Hannibal Lector, or Lecktor as he’s called here, as played by Brian Cox. A critical and financial flop at the time, this Dino De Laurentiis production is now seen as a cult classic, but it’s something of a strange match for Mann’s talent. Mann is highly adept at translating a cops and robbers mindset to the big screen, but Harris offers a specific schematic mind-melding link between the two sides that’s rather more on-the nose than Mann’s. 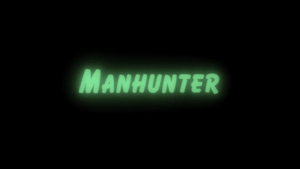 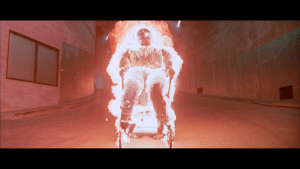 Our hero here is Will Graham, played well by William Petersen, who went on to make the FBI profiler something of a signature role in his CSI tv shows. Graham has just managed to get Hannibal behind bars, but at a huge psychological cost, and he’s reluctant to return to the fray until FBI director Jack Crawford (Dennis Farina) shows him two photos of families who have been murdered by the Tooth Fairy, a killer who is responding to the lunar cycle in a truly murderous way. How is the Tooth Fairy selecting his victims? Graham reluctantly goes to his previous quarry for help, knowing that he’s potentially playing the most dangerous of games…

Manhunter is interesting as a period piece; there’s no internet or mobiles, Graham’s staff rigorously take notes on pen and paper, while Lecktor commits all details instantly to memory. There’s also a strange reliance on personal ads and newspaper headlines to tell the story, something Mann seems to mock with some silly minor stories (‘Astronomers Glimpse God’) as counterpoint to the grim headlines. Mann doesn’t have his go-to band Tangerine Dream to provide a full synth score, but has fun with other details; Graham’s panicked sprint out of his intense one-to-one with Lecktor is a bravura sequence, and there’s memorable moments including the Tooth Fairy’s victim’s eyeless appearance and a stunningly arty sequence involving stroking a live tiger, an action that that mirrors Graham’s own dance with death. The last-gasp introduction of a blind character named Reba, played by Joan Allen, to be menaced by the Tooth Fairy, feels contrived as a way up upping the stakes of Graham’s investigation and setting up a Perils of Pauline denoument; it doesn’t feel quite right for Mann’s studied disdain for melodrama.

A few compromised shots aside, Manhunter looks amazing in HD and widescreen, and Mann manages to develop the notion of seeing in a persuasive way, helped by an unearthly performance from Tom Noonan as the killer who dreams of become a Red Dragon. ‘If you act like a God, you become a god’ is the warped sentiment here, and Manhunter makes something epic of the struggle between tortuted cops and zealot killers. Manhunter isn’t Mann’s best, but there’s plenty of evidence of the director’s considerable talent, and while the character of Hannibal is now as familiar to us as Santa Claus, Cox sets a sharp, poisonous tone in the two brief, jolting scenes in which he appears.