Yikes! In general, I only pick films I think might be good for review; life’s too short to review every old thing. But sometimes we have to make sure there’s a little grit in the critical oyster by putting some unfortunate film to the sword, and this week, that film is Ken Weiderhorn’s Shock Waves. This 1977 American sci-fi-/horror/action/rubbish thriller is a Zopix production, whatever that means, filmed as Death Corps, also known as Almost Human and introducing its silly new title in a migraine inducing credits sequence using a random selection of fonts; you know that you’re onto plums when a film kicks off as shonky as this and you’ll be right.

To be fair, Shock Waves’ seafaring adventure does start well, or at least, starts with an interesting idea, you can’t see it, but you can read about it in a lengthy opening scroll. During WWII, the Nazis are looking into creating super-soldiers, and seek to tap into supernatural forces to do so. They’ve heard that there was once a race of primal warriors who derived their powers not from weapons but from the earth itself, and seek out via experimentation on their own men to harness the same power. That sounds like an interesting conspiracy number, but Shock Waves doesn’t explore these themes for a split second. Instead, a boatload of appallingly dressed American tourists are shipwrecked on a remote island and slowly attacked by Nazi zombies who come out of the water. They don’t speak or say anything to identify themselves as Nazis so we end up with just another survivalist movie but with zombies dressed in Nazi uniforms.

‘What kind of a story is this?…Why would anyone believe this stuff ?” one character pointedly asks, and he’s got a point; this is Jackbootsploitation at its worst, made all the more confusing for an over-qualified cast of slumming thespians, led by a recently mummified John Carradine as the ship’s captain (‘Do you always steer the boat with your feet?…Don’t you know we’ve been hit by a ghost ship?’)  Even worse, you’d have thought that having returned to Britain during WWII from America and signed up for the National Service entertainment unit ENSA, Peter Cushing might have steered clear of bad-taste wreckage like this, but no, the usually suave actor gives an uncharacteristically bedraggled performance as the imaginatively named character ‘SS COMMANDER’, who has kept his army of freshly experimented troops in fridges or underwater or something. I’ve written before about how I usually find the kindly, grandfatherly face of Cushing to be a comfort and a tonic in troubled times, but sadly that trick doesn’t work here at all. 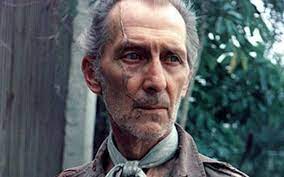 Badly shot on 16mm film, there’s no restoration in the world that could make Shock Waves look good, but this re-release via Amazon Prime is an absolute nightmare to watch, with grain pulsing and swimming around the images and a range of random optical processes making the film even harder to watch that it sounds. The zombies just keep emerging from the water but never attacking, the only kill with ten minutes to go is a death by sea anemone, and every time Cushing says Death Corp it sounds like ‘deathcore’ which is now an extreme metal genre and sounds very strange coming from Cushing in 1977. In short, Shock Waves is an utter and complete mess; if you dare to go back into the water, there’s much better schlock that this to be exhumed.