New on Netflix after one of their fakey cinema runs that no-one saw, Scott Cooper’s period thriller reunites him with the star of Out of the Furnace and his turgid Western Hostiles, Christian Bale, with considerably peppier results. Set at West Point military academy circa 1830, this is an old-school all-star murder mystery with Bale on detective duties after the body of a cadet is discovered with his heart ripped out. Gothic gloom pervades the scene, and while The Pale Blue Eye just about passes muster as a high-profile awards-season also ran, it’s got a number of points of interest, not least an intense performance by Harry Potter star Harry Melling as writer Edgar Allan Poe, seen at an embryonic stage here.

Poe is very much an informed onlooker as gumshoe Augustus Landau (Bale) arrives on the active crime scene; just who is killing cadets, and why? Suspects include doctor Daniel Marquis (Toby Jones), his children Lea (Lucy Boynton) and Artemus (Harry Lawtry), Poe himself,  Colonel Thayer (Timothy Spall), Jean-Pepe (Robert Duvall) and even the doctor’s wife Julia (Gillian Anderson). Can Landor and Poe solve the crimes before the criminal catches up with their investigation?

Based on Louis Bayard’s novel, The Pale Blue Eye is a fairly cold-hearted and mechanical story that springs to life when the spirit of Edgar Allan Poe is evoked. The grandson of Dr Who Patrick Troughton, Melling didn’t have much to do but sneer as Dudley Dursley in the Potter franchise, but he takes the role of the eccentric writer with both hands, making the gaunt Poe fun to watch as he delves enthusiastically into the gory details. Bale doesn’t showboat in the lead, giving a committed, strong performance, but somehow despite lots of good acting, The Pale Blue Eye’s mystery doesn’t resolve itself in a satisfying or memorable way due to a lack of emotional involvement, something of a staple of Cooper’s work to date. 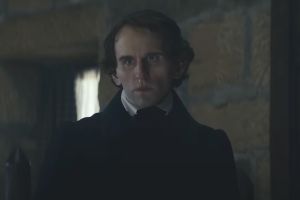 For Netflix users who are looking for another mystery fix post Glass Onion, The Pale Blue Eye has enough juice to make for a decent night in, but not much else. The starry cast are largely wasted in roles that aren’t that vital to the solution, and while the setting and literary angle are fresh, Cooper’s film is somehow less memorable than the sum of its parts. The winner here is Melling, who makes you wish that the focus was on Poe himself; seeing the writer solving crimes for himself would make a good spin-off if the algorithms running Netflix finds that there’s a big enough audience to make it worth a shot.