Tom Hanks is often described as the James Stewart of his generation; he’s managed to have a wildly successful career as an actor without being the biggest, most extreme anything, just a straight-up guy. From a comic leading man in the 80’s to an award winner in the 90’s, Hanks is now something of a US national treasure, and there’s usually at least one film of his to consider in the awards season melee. This year, we celebrate Hanksgiving with A Man Called Otto, based on the same 2012 Fredrik Bachman book that led to 2016’s Swedish hit A Man Called Ove. 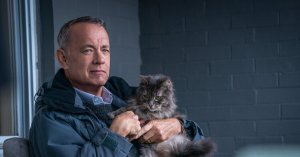 It’s easy to see why director Marc Forster and writer David Magee wanted to get their mitts on this property; it’s ideal for Hanks to play against his nice guy image. He plays Otto Anderson, a grumpy man living in a suburb in Pittsburgh, Pennsylvania. With no obvious friends or family, and mourning the recent death of his wife, Otto decides to take the easy way out and hang himself. But somehow, despite his clear intentions, life keeps getting in the way of Otto’s appointment with death, and his crayzee new neighbour Marisol (Mariana Treviño) has plans for him. She’s just moved to the neighbourhood with several kids in tow, and really needs Otto to be a good neighbour. And slowly, bit by begrudging bit, Otto finds himself stepping up to the plate to be a good citizen, although time is running out for his redemption…

So it’s yet another beautiful day in the neighbourhood, but Foster has a spotty track record for making the beats count; it’s hard to see what the distinguishing feature in the canon of the director of World War Z and Quantum of Solace might be other than chaos. In this case, he does a straightforward if uninspired job of delivering an untypically sour acting turn from Hanks, and a lively one from Treviño, who is tasked with creating the emotional engagement that Otto lacks, and delivers the goods in healthy proportions. If Hanks is the reason that most audiences will be drawn to A Man Called Otto, Mariana Treviño is arguably the reason that the same audience will relish it. 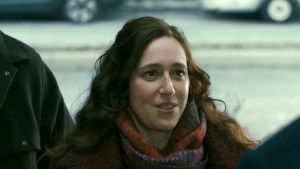 A Man Called Otto has a deliberately bitter-sweet ending that does require trigger warnings; if you bring on suicide in Act One, then there’s bound to be tears before the end. As an actors exercise, it’ll work for those seeking touchy-feely connection, although there’s something a little over-familiar about how this story Americanises the previous, subtitled version in a PC way. A Man Called Otto doesn’t go far enough to update the story to our post-Covid world gone mad; as the challenge of unchecked social media makes enemies of us all, it’s easy to understand why Otto would want to take a step back from a neighbourhood that’s a lot easier to resist than the bubbly Marisol.