If you’d told my teenage self that the big tent-pole movie of 2022 would be a $200 million James Cameron sci-fi epic, then I’d have felt the future was bright enough to invest in some shades. But while Cameron’s Terminator and sequel, plus Aliens and Titanic were all bona fide pop culture sensations in their day, his Avatar project has had a more troubled birth. The first film reigned as the most financially successful (adjusting for inflation) for a decade, a long enough gap to generate a substantial backlash of those who didn’t care for CGI blue people, and missed the old JC cyber-punk sturm und drang. The good news is that the first sequel to Avatar, The Way of Water, is much, much more of an action film that its predecessor, and James Cameron still has the stones when it comes to creating outrageous sci-fi spectacle that looks like a Frank Frazetta/Chris Achilleos poster on acid. That’s why it’s raked in a billion dollars in just over two weeks. 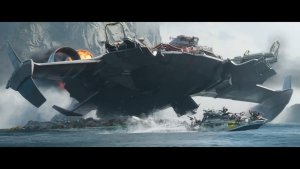 So the jury was out. What I didn’t want to see here was more po-faced diplomacy, Dances-with Aliens metaphors, subtitles, spirit trees and ecological subtext. What I wanted was a full-on weapons-grade colonists vs Na’vi actioneer, using the Pandora pretty-ass setting as a sandpit for gruelling action, and that’s pretty much what we get. It’s over a decade since the first film, and in an easily-grasped Cape Fear scenario, Jake Sully (Sam Worthington) decants his new family to a reef on the eastern seaboard, but their respite is unlikely to be tranquil. Miles Quaritch (Stephen Lang) embraces the new technology to re-emerge as a pumped-up avatar on Pandora, and even creates his own affinity with the wildlife to ride into battle alongside a high-tech action play-set of military space-ships. That mid-section slows the pace, although it’s not dull; Jake’s family are well differentiated, Sigourney Weaver turns up in blue, Kate Winslet too, and Jermaine Clements looks almost as surprised to be in this as I was to see him in it. The finale, however, is a good fifty minute rip-the-arse-out-of-this-CGI greatest hits package as Jake and his family roll with the punches through some undeniably impressive action highlights in and around a sinking vessel of enormous proportions. You can see the difference that Cameron’s absence made to Terminator and Alien franchises from his signature work here; I guess I’ve finally learned how to stop worry and love Pandora.

‘Don’t you think I couldn’t kill this kid?’ says Quaritch as he takes a hostage, ‘…we’re not even the same species…’ So we’re firmly on the side of friendly natives against racist colonists here, with Cameron making Pandora less of a Vietnam flashback but a universal setting that resembles a number of historical settings for occupation and uprisings; that’s kind of the theme of the Avatar project to date. ‘The way of water has no beginning and no end,’ is one of the key lines here, but Cameron’s film has both; it’s not franchise building if the film engages and squeezes the audience’s emotions in the old style, and Cameron is just the storyteller to do it. Scenes like Quaritch fighting a dragon on a cliff-top make CGI look amazing when the same kind of moments looks so tatty in other movies. I can’t say I was really looking forward to my tour of duty in Pandora, but The Way of Water turned out to be a far better film that the traditional bloated epic. It’s a lot more fun that a Marvel tag-team bang-about, an over-stretched Hobbit movie, the Tron reboot or the last Star Wars trilogy, making it the best festive hit since Rogue One. Something of a throwback in terms of the narrative to the crowd-pleasing 80’s, Avatar-The Way of Water works as a pumped-up balls-to-the wall action movie, and to quote from a range of tough-guy tech-talk, ‘If you can’t get out of it, get into it!’