William Castle is a somewhat neglected figure, perhaps because he staked his reputation on novelties, some would say gimmicks, which were dated from the moment they appeared. Such felicities as having a skeleton appear above a cinema screen seem rather old fashioned in the shadow of IMAX 4DX. So it’s rather nice to see The Tingler appear on Amazon Prime is a natty new print that makes it ripe for rediscovery.

What’s surprising here, given Castle’s reputation, is the ingenious nature of the whole conceit. The Tingler is a horror film, but one that operates in a specific and rather post-modern way. Vincent Price plays Warren Chapin, a scientist who has been working to isolate the Tingler, a creature that feeds on fear; it appears inside the human body, often at the instant of death, and Chapin is keen to isolate it. Many boffins might have been tempted to use illegal means to pursue this goal, but fortunately LSD was legal in the US at the time, and The Tingler features the spectacle of Price and other cast-members cheerfully blowing their own minds and (pretending to) trip on acid.

This in itself is odd enough, but things get weirder when Chapin meets a woman who is a deaf mute and is unable to express herself; she’s got a lifetime of fear bottled up inside her and is ready to blow like a bottle of champagne, releasing a mega-tingler. Her husband owns a silent-movie theatre which appears to be showing 1921’s silent Tol’able David in a permanent loop, and when The Tingler escapes, it escapes into the theatre and begins tingling the occupants of the seats. 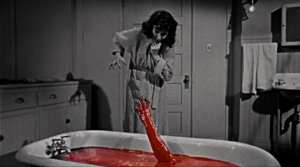 This leads to a quite wild sequence in which you, the viewer, find yourself watching the same silent movie, with Vincent Price on the soundtrack warning you about dangerous creatures on the loose and potentially assaulting your backside. It places the audience in the movie in an absurd and yet clever way; there’s also a brilliant scare involving a splash of blood-red in an otherwise black and white movie. With a frank view of drugs, plus some meta-narrative twists, The Tingler is a great way to waste 80 minutes, and shows that 1959’s cinema showmen had plenty of ingenuity as the on-going battle with tv hotted up.