Bah! Humbug! Let’s take a look at Christmas past, and specifically to the cinematic Christmas of 2019. Back then, we had little idea that the decade waiting round the corner, labelled ‘the roaring 20’s, would actually turn out to be a sh*tstorm of global turmoil, with over six millions deaths and many more lives ruined by the pandemic. Back in 2019, we had nothing to complain about by comparison, but Paul Feig’s gift-wrapped product turned out to be rather less warm and fuzzy than the simple feel-good fare that might have been anticipated. With a story and script credit, plus a central performance all from Emma Thompson, it’s a career low for her that swiftly got turned around with winning turns in Cruella and Matilda the Musical.

Some spoilers are required here, although the much discussed ‘twist’ of Last Christmas is clear from the trailer. In the words of the George Michael song ‘Last Christmas, I gave you my heart…’ Someone, somewhere, presumably Thompson thought, ‘wouldn’t it be great if that meant actually donating a heart via a medical proceedure?’ because this absurdly literal reading of the song is the crux of matters here. Emilia Clarke plays Kate, a young woman working as an elf in a grotto run by Santa (Michelle Yeoh). Kate is a sexually active young woman, so we know there must be something wrong with her, and we get dialogue clues that she’s been ‘sick’ and requires a heart transplant, which is quite ‘sick’ in most people’s books. Kate is obsessed with George Michael, and we hear his songs play over her activities in ways that defy logic ; ‘Everything She Wants’ as she eats a burger alone on a bench, or an innocuous ice-skating practice is accompanied by Michael warbling about “God not keeping score.’ Do you miss George Michael? Then surely you’ll want to hear George Michael’s music reduced to a jarring temp score that doesn’t fit the action at all?

Nope. Back to the story. Kate begins a relationship with a mysterious stranger called Tom (Henry Goulding) who may or may not be connected to her heart transplant; is he a doctor? Or an angel? Whatever he is, we can tell Tom is a good man because he works in a homeless shelter and doesn’t want to sleep with Kate. In fact, Tom is here to tell Kate how to live her life, and excuse my sarcasm here, that’s a rare quality that men can offer and which most women badly need. Tom wants Kate to reconcile with her Croatian mother, played by Emma Thompson because there are literally no Croatian women who could possibly have played this role. We see Thompson watching Brexit news on television and screaming ‘It’s because they hate us’, a scene that might have had some political resonance if Thompson wasn’t so poorly qualified to speak for the average Croatian woman. 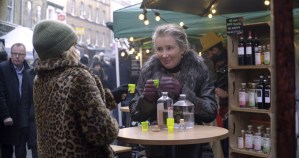 It’s hard to know what to say about a film that hears ‘Last Christmas, I gave you my heart…’ and constructs a drama about heart transplants. How about Don’t Stop Believing? a Paul Schrader drama with Mark Wahlberg as a religious pastor who faces a crisis of confidence? Or I Left My Heart in San Francisco, with Nicolas Cage as a hospital intern who forgets a vital organ on a trip to the Bay area? Such conceits almost work as jokes, but as jokes only; they reduce the meaning of the song to absurdity, and that’s exactly what Last Christmas does. The rom here isn’t romantic at all, and the com is non-existent; a throwaway line about ‘lesbian pudding’ is the best they have to offer. Similarly, there’s limp cameos from the likes of Sue Perkins, and even the legend that is Peter Serafinowicz looks mortified as he offers up his ‘elf and safety’ joke and shuffles off.

With an underwhelming musical number as a climax, Last Christmas is a blot on the resumes of all concerned; like The Holiday, it’s a festive ghost that will haunt and diminish the stars, returning every year to remind us of their desperation to grab audience’s cash from them. Clarke has noted that she won’t be reading the reviews for this one, presumably with the notion that if she doesn’t know that people hate this film, then that hatred isn’t happening. If she ever changes her mind, she should know that the audience, baited, switched and heading for the exits long before the credits, were relieved to escape the screaming festive nightmare that Last Christmas eventually becomes.