I know, I know, but hear me out; one of the goals of this blog has been to write about what I’m actually watching rather than what I’m meant to be watching, and somehow I ended up secondary smoking the entire first season of The Mighty Ducks, a reboot of the popular kids-play-ice-hockey-badly franchise that so many of us found so resistible back in the 90’s. D1, D2, D3 all might have passed me by, and even with the great Emilio Estevez returning to play his signature role of coach Gordon Bombay, I still didn’t register a twitch on the Geiger counter of interest. But add Lauren Graham to the mix…

Yes, Graham hit big back in the day as Lorelai Gilmour in The Gilmour Girls, a coming-of-age soap opera that, for reasons too personal to explore here, I have seen every episode of at least once. Graham plays Alex, a hockey-mom with a sulky kid who dreams of playing for The Mighty Ducks, who are not the underdogs you might remember from the films, but conceited establishment kill-joys who delight in smashing the dreams of children. When the Ducks reject her son, Alex and Gordon team up to create the Don’t Bothers, a team of misfits in the mould of, erm, the old Mighty Ducks. 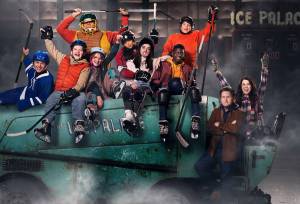 It might sound confusing, but it isn’t; this is the kind of written-by-computer scenario where you could plot all ten episodes after the first ten minutes and get every prediction spot on. Training montages, sudden injuries, last minute reprieves, first goals, first wins, superstitions, more training montages; there’s no surprises in the world of The Mighty Ducks, but there’s also no deviations from the branded message about being yourself and being in a team. The first episode entices vicarious interest by suggesting that the Don’t Bothers are going to get their asses handed to them violently on the rink, but while I kept turning in in the hope of seeing a few of the speccy moppets punted through the plexi, none of the anticipated eye-gouging, stick-rattling carnage occurs.

As comfort food, The Mighty Ducks: Gamechangers just about passes muster because it 1) features the original star, Estevez, in good form and cameos from the original Ducks, plus 2) gets a fresh spin on old material by adding Graham to the mix in a role that’s very, very similar to the one Gilmour Girls fans love her for. Sadly Estevez didn’t return for the second season and the show was cancelled before a third, but Gamechangers doesn’t disgrace the legacy of the Mighty Ducks; it’s a straightforward motivational drama where the kids speak like adults, the adults speak like little kids, and the audience are caught somewhere between the comforts of childhood and game-changing maturity.