Arrgghhh! It’s become a Christmas tradition for me to review at least a couple of the weak sauce festive movies that proliferate like cheap tinsel at this time of year; The Noel Diary was an automatic choice for this honour by dint of featuring international treasure Bonnie Bedelia from non-Xmas movie Die Hard, so let’s get into it; Netflix holiday movies have all the corny taste of Hallmark, and this Nicolas Sparks knock-off has better rom-com credentials than most. The big draw here is Justin Hartley, familiar from popular if stomach-churningly sentimental soap This is Us, and no doubt carrying part of that emotionally bruised audience into his intensely vague performance as a self-centred writer who gets an unexpected shot at love one crazy Yultide. 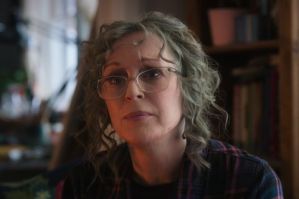 Based on a novel by Richard Paul Evans, The Noel Diary introduces hunky writer Jake Turner as he navigates all kind of last minute offers from his many female fans keen to canoodle over the holiday; he’s only got eyes for Eva, and of course, Eva turns out to be a big old dog. Aww! How cute! Turner introduces himself with a good quote from Robert Frost (‘the best way out is always through’) and finishes on an even better one from Jack Kerouac (“it always ends in tears anyway’), but literally nothing else he ever says or does suggests any kind of depth. Turner and Eva are busy clearing out the house of his recently deceased mother when he hooks up with Rachel (Barrett Doss) who is engaged to someone else, but clearly finds herself falling for his mix of chunky knitwear and vanilla homilies as she searches for info on her own birth mother, whose diary Turner somehow has, allowing Notebook-style flashbacks. Turner can see that it’s the season to be jolly, his next-door neighbour (Bedelia) has got admirers including James Remar thanks to one of ‘dem new fangled dating apps, but will fortune ever smile on Jake Tucker?

Writer and director Charles Shyer had a writing credit on Smokey and the Bandit back in 1977, but there’s not much goodwill left in the well after woeful efforts like I Love Trouble and he’s not made a feature since the awful Alfie remake in 2004 and it’s easy to see why. A festive movie doesn’t have to be profound, but it doesn’t have to be this stoopit either. Turner is a banal character who doesn’t feel like he could exist anywhere but a rom-com, and adding edge by having Rachel loyal to her intended husband creates the wrong kind of frisson; some very broad strokes indicate that her fiancé is a piece of trash to be traded in because he’s a bean counter, but why should a spiritual girl like Rachel have been marrying him in the first place, and how should we feel about her infidelity?

What’s dumb-founding about The Noel Diary is how illiterate it is; Turner might as well be astronaut Mike Dexter, he’s just a lump of white bread with zero inner life. If anyone ever wonders what a writer’s life is like, as a rule of thumb, it’s nothing like Jake Turner’s vapid pose. Doss tries hard with a thankless part, and the antics of the silly support characters come as a welcome relief from a turgid main plot in which Jake and Rachel struggle to put aside their pasts to get together before a glib ending. Mocking a bad Xmas rom-com is part of the fun of the holiday; the best that can be said for The Noel Diary is that it fully deserves our derision.