Some films are banned, other films are quietly removed from circulation. Lewis Allen’s 1954 thriller was withdrawn from our screens via the wishes of star Frank Sinatra who, back in the day, felt that this and The Manchurian Candidate were a little bit too close to the bone to be widely seen. That’s because both films deal with presidential assassinations, and after Dallas 1963 in particular, that was a hot topic that the famous crooner wasn’t so keen to be the poster boy for.

Suddenly takes its name from a small town; a train is due to call in, and the president of the USA, a reputable profession back in those days, is on that train. There’s a three-second window of opportunity for a sniper to pick off the POTUS, and John Baron (Sinatra) is planning on making a killing. Disguised as secret government agents, Baron and his men take over a domestic abode with a clear sight line and wait; Sterling Hayden is the resolute cop who has to figure out the plan and Die Hard himself one step ahead of the crime before it happens… 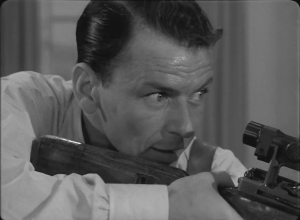 Ok, so some of Suddenly is a little dated now; there’s a few scenes of characters stiffly asking each other to show their credentials which can’t help but raise a smirk, and sexist attitudes like ‘Helen, will you please stop being a woman ?’ don’t play so well today. But Sinatra was a dangerous presence when he wanted to be, and this dank role, as a sinister edge-lord who throws his weight around, suits him to a T. Baron seems to take sexual pleasure from violence, and he forces complicity from those around him. ‘Kill them all, you can only hang once’ is his philosophy, and although Baron’s mission fails, his nihilism leaves a mark.

Baron claims that his feelings were ‘taken out of him by experts’, but his nihilistic attitudes reach back less than a decade or so to the Nazis, and so forward to 2022 and the GOP’s game-changing pre-midterm tweet of the three chaos agents of the anti-semitic apocalypse ‘Kanye. Elon. Trump’. ‘What do they want?’ Baron says of those who hired him, before answering his own question ‘Nothing’; the disruption and destruction of democracy is the point of the gun-for-hire actions he commits. Suddenly deliberately leaves the details of the ongoing conspiracy blank, which gives it some ‘fill in the blanks’ prescience today. Even though the president is saved, the ending is downbeat and blank, with the cop stumbling past the camera mumbling ‘I don’t know’ as the credits roll. Suddenly is a tough, unsparing film that is worth a revival today; as a historical document, is captures a sense of pessimism and entropy that wasn’t given free rein until the rampant downbeat paranoia of the 70’s.