Yikes! It’s notable that while the overall cinema box-office has taken a pummelling in 2022, horror films like Black Phone, Barbarian, Halloween Ends and Smile coined it in; teenagers will always want to test themselves and try their luck in the dark, and horror films provide exactly the kind of pre-packaged emotional challenge a young person enjoys. But horror films don’t have to be just a string of jump scares; writer/director Andy Mitton’s The Harbinger marks itself out as one of 2022’s most significant genre entries on several counts.

And let’s not mince words about why; The Harbinger may evoke a few memories for dreamlike horror, from the Cabinet of Dr Cagliari to Nightmare on Elm Street, but it’s very much an original film that draws on a real-life tragedy, the pandemic that never quits. So we’re talking social distancing, mask etiquette, maintaining family bubbles, alcohol rubs in cars, and a thriller set during the jittery initial stages of 2020; if all that’s a trigger for you, you’d better find something else to watch. But horror, smart horror, has always fed on what’s happening in society now, and while other genres struggle to catch up, The Harbinger goes directly to that ominous, dangerous place that few others dare. Gabby Beans plays Monique, who leaves behind her family bubble to come to the rescue of her old friend Mavis (Emily Davis), who is having dreams so bad that she can’t hold down a job. Monique is keen to help, but sleeping in the same bed as Mavis doesn’t half their troubles, it unexpectedly doubles them, and soon the grim figure of The Harbinger, who haunts Mavis’s dreams, seems to be coming after Monique too… 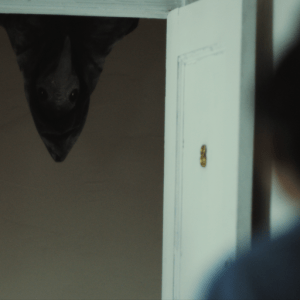 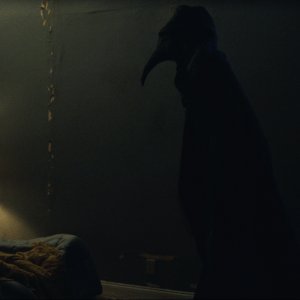 Bad dreams can make good cinema; The Harbinger recalls Dead of Night’s framing story in depicting the nightmare that never ends; the pandemic is merely ‘the cherry on a sh*t sundae’ as one character observes. Opening with a startling image of fresh flowers on a stone statue of an angel, The Harbinger is a literate, well-characterised and genuinely harrowing film that upends dream-movie clichés and forms something fresh about the pandemic that it seems impossible to wake up from; the fake news era has ended the notion of shared reality. The Harbinger also revisits a notion or two from Chuck Palahniuk’s Lullaby; an in-the-know expert talks about how an idea can potentially go viral and endanger all who encounter it. But while Mitton’s film delivers in the political way that the recent Candyman reboot didn’t, it also delivers wounding, alarming jump scares (and the most bloodcurdling shriek that my poor cats have ever heard), largely through the sinister plague-doctor form of the Harbinger itself.

I’ve been using the image of the plague-doctor as my avatar for years; it long pre-dated the pandemic, and was never meant to reflect a specific meaning in connection with the virus. The plague doctor is something connected to my spiritual home of Venice, and to Kubrick’s Eyes Wide Shut, a sinister authority figure that can’t quite be identified. Like Ben Johnson’s artwork The Keeper, which I used to regularly visit Glasgow Art Gallery in Kelvingrove to see, it’s an image where the mask itself becomes more important, and imposing, than the person supposedly behind it. As a film, The Harbinger resurrects the ambiguous sense of menace behind the plague doctor garb; it’s a disturbing, modern take on mythic horror, and one of the scariest films of the year….

Thanks to XYZ Films, who release THE HARBINGER, the latest film from Andy Mitton (The Witch in the Window), in cinemas and on VOD on December 1st 2022.