Without fail, the least popular films I write about are withered 1970’s sexless British sex comedies; my readership can be reduced to a trickle by my self-sabotaging desire to write about some tatty, end-of-the-pier innuendo-laden sexist tat, from That’s My Funeral to The Magnificent Seven Deadly Sins. What can I say in my defence? These films used to be part of the BBC’s film package when I was growing up, and were as much a part of a daily diet of cinema as Truffaut or Peckinpah. And now, viewed from the opposite end of the time-telescope, they still exert a certain power to horrify and yet amuse by their wrong-headed presumption.

Not a prequel to 2022’s Don’t Worry, Darling, although that title does suggest a link, Not Now, Darling was adapted by playwright Ray Cooney from his own popular farce, and must have been something of a sure-fire hit. Co-written by John Chapman, another graduate of the ‘whoops vicar, where’s my trousers?’ school of comic confusion, Not Now Darling is primarily a vehicle for the robust talents of the late, great British icon Leslie ‘ding-dong’ Phillips, who went on to co-star with Angelina Jolie in the Tomb Raider films. Phillips plays Gilbert Bodley, a lothario-about-town who concocts a confusing scheme in which he sells a fur coat to his mistress’s husband Harry (Derren Nisbet) to make some easy cash. The story unfolds almost entirely on one stagey-set, the shop of Arnold Crouch (Cooney himself), where moll Janine (Julie Ege) is caught in various stages of undress. 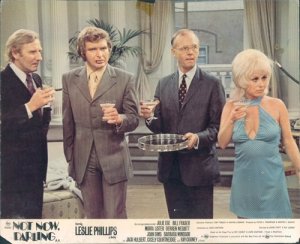 Sex is an odd thing in British comedies; to be desired, certainly, but also a prospect which makes men go weak at the knees and generally collapse into some kind of moral panic. There’s more nudity in a modern perfume advert than in 90 minutes of Not Now, Darling, but there are occasional glimpses of the quick-fire verbal gags which must have wowed stage audiences. Barbara Windsor appears to double-down on the ditz, while old stagers Cicely Courtneidge and Jack Hulbert wander around the set in a reasonably spry fashion. They were pretty much the British celebrity couple of the 1930’s, and at least are treated with some dignity here.

As a sex-comedy, Not Now, Darling is something of a farce, remarkable only for extreme tameness and a dry, interior quality. A sequel, Not Now, Comrade, followed in 1976, but by then, sex had found more direct routes onto the screen, and the idea of a woman hiding in a closet wearing nothing but a fur coat was no longer considered the ultimate in outre behaviour. Guilty of reflecting sexist, out-of-date tropes, Not Now, Darling has gained in scholarly interest over the decades by becoming a museum piece of what audiences once found funny, but seems now more peculiar than ha-ha. Ding-dong indeed, darling….