Ou sont les neiges d’atan? Or indeed, where are the snows of yesteryear? Times change, but great stars never fade. Simone Signoret was one of cinema’s great performers, not just a pretty face, but a unique, luminous talent that could centre a whole project; Jacques Becker’s agonisingly downbeat yet assuredly romantic 1952 classic gets a big screen and blu-ray revival here from Studio Canal to celebrate its 70th anniversary, and it’s a great choice for 4K restoration. While Casque d’Or has rarely been out of circulation, Signoret’s films aren’t frequently enough seen or celebrated, making this a welcome chance to see what all the fuss was about back in the day.

Signoret plays a courtesan here, Marie, who is known as Casque d’Or (or rather less poetically the Golden Helmet) because of her lustrous barnet. In a sumptuous musical opening with a 19th century Paris theme, we see that Marie is tiring of being a moll to a small-time, no mark gangster, but her eyes drift to Georges Manda (Serge Reggiani) who is an ex-con seeking work. Marie and Georges have a thing going on, but mob boss Felix Leca (Claude Dauphin) isn’t having any of it, and sets up a back-street gang fight to take Manda out of the picture. But Manda is made of sterner stuff, and manages to defeat and kill his opponent, fleeing with Marie to a temporary respite in the idyllic countryside. But fate isn’t on the couple’s side, and a return to the city proves fatal… 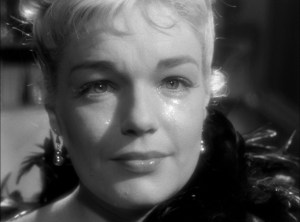 Casque d’Or has a number of talking points; despite their low social standing, it’s easy to get behind star-crossed lovers Georges and Marie when they go on the run. That’s partly because they’re unfairly maligned, but also we see, as they cross themselves leaving church, that they’ve got far more values than their more socially respectable tormentors. Becker’s direction is always on point; from a merciless, yet sensual close-up on Signorent’s weeping face (above) to the shocking sound of a gun firing despite the weapon itself being is out of frame, Casque d’Or is always bending cinematic rules and conventions to create a fresh narrative style of its own.

With a strong female lead, unconventional moral code and a remarkably downbeat ending that’s become something of a cinematic legend, (no spoilers here), Casque d’Or is a terrific movie that should please any genuine, mature cineaste. And it’s a welcome reminder of the power of women in cinema; despite a male production team, this is very much Signoret’s movie, and her every move reveals her as the iconic beating dramatic heart of the demi-monde of La Belle Epoque.

Extras -“Alex and Marie: Once Upon a Time There Was Casque d’Or”

“In the Heart of Hearts – The Legend of Casque d’Or”

CASQUE D’OR HITS IN UK CINEMAS FROM TODAY, FRIDAY 25TH NOVEMBER 2022, THEN ON UHD BLU-RAY, BLU-RAY, DVD and DIGITAL from 28TH NOVEMBER 2022. THANKS TO STUDIO CANAL FOR ACCESS.