The magic that Orson Welles created with his robust 1958 thriller Touch of Evil suggested that all he needed was a bit of freedom and funding and the classics would just roll out of him; 1962’s The Trial proved that theory wrong. Adapting Franz Kafka’s novel was a bold, headstrong movie from the auteur, but critics were divided while audiences stayed away. The film subsequently fell into disrepute and disrepair, but this welcome new blu-ray from Studio Canal gives audiences another chance to assess the considerable merits of Welles’ highly idiosyncratic take on Kafka.

For a start, The Trial looks very modern; Welles used real locations in Zagreb and Paris, including the Gare d’Orsay in Paris, and the evocation of Josef K’s world of cramped corridors and acres of office-space is remarkable in HD. Welles also nails his casting; we need to feel that Josef K may or may not be hiding something and Anthony Perkins, red hot from Psycho, was an ideal choice, not just because he’s a twitchy, nervous type, but because Perkins was not living at a time when he felt he could declare his sexuality publicly, and Welles played on that here. Much like the casting of Rock Hudson in John Frankenheimer’s Seconds, it’s a deliberate crossing of wires between public and private lives that makes The Trial feel deliberately uncomfortable by design. 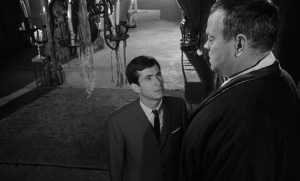 The story, correctly for Kafka’s deconstructive prurposes, isn’t much of a story; Josef K is accused of something, but no-one will tell him exactly what. He’s to be put on trial, or maybe he’s already on trial; no-one seems able to explain. Josef goes from denial to defiance, to anxiety, to panic, to acceptance, then back to rebellion, but we never get a grip on what his crime might be. If all this sounds dry or downbeat, a trio of amazing actresses sweeten the sour, nightmarish proceedings; Elsa Martinelli, Jeanne Moreau and Romy Scheider are a hard-to-beat combo of sirens, and their air of exotic desirability is only accentuated by Perkins’ surreal lack of chemistry with each of them.

Welles also has some other fish to fry, not least an extended cameo as a sinister judge in a role intended for Jackie Gleason, but also some fresh reflection of them new fangled computers, a new element in 1962. ‘Computers can get you the answer to everything’ one character explains, but the advent of these electronic brains only add to Josef’s discomfort. ‘To be in chains is sometimes safer than being free’ is another sample of sage, practically-minded advice, but if ‘guilt is assumed to be proved’ by the state, then we’re in an era of historically craven McCarthyism, whether Joe or Kevin, where ‘lying turns into a universal principle’ for political expediency.

The Trial was an early production for Superman producer Alexander Salkind, and its easy to see why he was attracted to more commercial projects after this bleak entry, which leaves you feeling, much like the characters, ‘bandy legged…smashed like a cockroach.’ Meanwhile the urchins in the street don’t offer much resistance; a character nastily threatens these ‘“dirty-minded little pussies” with an ice–pick. You can’t blame audiences circa 1962 for finding all this a bit confusing, but that raw, unpleasant, confounding feel is very much Welles’ intention, and subsequent opinion on the film is that it leans far closer to a unheralded masterpiece than a commercial disaster.

THE TRIAL is released on 4K UHD, Blu-ray, DVD and Digital from 21st November 2022 and is available HERE

The restoration was completed by STUDIOCANAL and la Cinémathèque française and made possible thanks to the support of CHANEL.