Get your motor running! It might come as a surprise to my regular reader, but I’m a fan of the sports car. Saving up my pennies to buy a black sports car was something of a turning point in my life. But I’m no Top Gear-watching petrol-head, and have little idea of exactly what goes on under the hood; all I can attest to is that when you’re swanning around in a FO vehicle, pretty much everyone seems to smile at you as you pass.

Consequently, I’m a sucker for movies about designing and making cars, from Tucker: The Man and his Dream to Driven to The Betsy to Le Mans 66; writer/director Bobby Moresco’s Lamborghini: The Man Behind the Legend is a straight-as–a camshaft biopic based on Tonino Lamborghini’s biography about his father entitled Ferruccio Lamborghini. La storia ufficiale. At 97 minutes, this is a rather more humble offering than the kind of full-blown epic that Michael Mann has promised on the subject of Enzo Ferrari, although Ferrari does appear as the antagonist here, played by the always stylish Gabriel Byrne. And as well as some pastries and expresso, the great Mira Sorvino is on hand to make sure it’s not a complete sausagefest as the boys and their beautiful toys take centre-stage.

‘If you are as good with tractors as you are with women, we are going to be very rich…’ Ferruccio Lamborghini is told in post WWII Italy; initially played by Romano Reggiani, then by the hardest-working–man-in-showbiz Frank Grillo, Lamborghini takes a family business making agricultural vehicles and air conditioners, and sets a fresh target; creating a sports car empire to rival industry leaders Ferrari. After taking in the origins of the company, we skip forwards to 1963 and the kind of creative technical decisions that went into the making of the first Lambo, the 350 GT and then the Miura. Materials had to be strong enough for the car to be function and be safe, yet light enough to ensure speed; the shockingly sleek result prompted Frank Sinatra to comment; ‘You buy a Ferrari when you want to be someone, you buy a Lamborghini when you are someone.’ 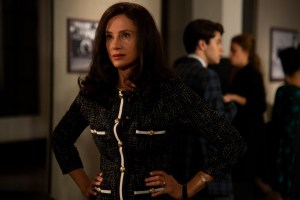 Moresco worked with Paul Haggis on Oscar-winner Crash, and seems to have managed to navigate some hair-pin turns in terms of changing personnel on this one; Antonio Banderas and Alex Baldwin were previously mooted for the competing roles now filled out expertly by trusted components Grillo and Byrne, and there’s a neat metaphorical interstitial that pictures the two men racing against each other through city streets. Those who don’t care about the aesthetic beauty of objects will find nothing to watch here, since there’s little melodrama and a tight adherence to known facts, but that’s why Moresco’s film is worth commending to those in the know about cars. It’s a stripped down but appropriately stylish and personal tribute to a man whose passion for cars changed the way we drive, and that’s more than enough to be worth a rental. Mann’s long-awaited film is still revving up in the fast lane, but in the race to be in pole position, first blood goes this Lambo.

Signature Entertainment presents Lamborghini: The Man Behind the Legend on Digital Platforms 21st November. Thanks to Signature for access.