The Russian film-maker and poet Andrei Tarkovsky was unique in that his output consisted of nothing but masterpieces; every film he made was a stone cold, five star classic. American comedian Chevy Chase came to film-making years later, but his role-call of quality pics is no less impressive; Foul Play, Caddyshack, Spies Like Us, and four Vacation movies. Ordinarily, I’d be violently opposed to the idea of any film-maker attempting to remake or reboot any of Chase’s sainted works, but while Chase’s two outings as Gregory Mcdonald’s chancer of a private detective are an undoubted career highpoint, it’s time to give someone else a chance with those false teeth and quips; long live the new Fletch!

Given the strength of Mcdonald’s novels, the idea of resurrecting Fletch on the big screen has never quite gone away, but star Jon Hamm feels like an ideal fit. Hamm’s ability to switch from straight acting to pastiche and back again in an instant is ideal for the wisecracking hero, and Confess, Fletch is an ideal starter-kit for a franchise. Although the action kicks off in Italy, the setting is largely Boston as reporter Fletch tries to get to the bottom of some stolen art, a kidnapped billionaire, and a murder in which he’s the main suspect. Part of the USP here is how Fletch laughs in the face of danger; in the opening scenes, he casually shrugs off a potential murder charge as if it was an unpaid parking ticket, and that’s right for the laconic CGAF feel of a project like this.

In the hands of Greg Mottola (Superbad, Adventureland, Paul) Confess, Fletch is a minor but decidedly fun film noir, as laid back as an episode of The Rockford Files, but with acres of charm from Hamm and a over-qualified cast of prime-suspects including Annie Mumolo, Kyle McLachlan, Lucy Punch and Marcia Gay Harden. The mystery itself is heardly earth-shattering, but the small-stakes plotting is better than usual, and it’s always a blast seeing how Fletch talks himself into and out of trouble; Hamm’s Mad Men star John Slattery adds to the pot as his spiky editor. 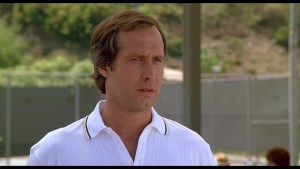 In short, nobody has worked harder than me to preserve the legacy of Chevy Chase, but it’s finally time to move on for a younger generation of charmer, and I’m endorsing Jon Hamm as the candidate who has my vote moving forwards. His Fletch is arguably closer to the original books than Chase’s master of disguise, and with a large gap in the market for smart, witty, low-key detective fare, Confess, Fletch hits the target in terms of laughs per minute. Confess, Fletch didn’t perform well at the box-office in the US, perhaps due to one of these contrarian/hybrid campaigns that meant the film was easily viewable at home on the day it hit cinemas. The Chevy Chase originals will remain in our hearts forever, but this new venture breathes new air into the character of Irwin M. Fletcher, so bring on Fletch’s Fortune! And the last words should belong to Chase himself; ‘And by the way, I charged the entire vacation to Mr. Underhill’s American Express Card. Want the number?’