‘It’s your use of a flanger I’d like to discuss …’  Today’s film addresses an over-heated subject rarely tackled in cinema; yes, we’re talking about wind. Sure, Blazing Saddles provided evidence of the new frankness of the 70’s with its outrageous campfire scene, and several films have studiously tackled the life story of professional farter Joseph Pujol, known by his stage name Le Pétomane, but in general, the expelling of air through one’s back passage is something which has spawned precious few blockbusters or art-house entries to date.

Step forward the fearless Peter Strickland, creator of art-house, or should that be fart-house hits like Berbarian Sound Studio, The Duke of Burgundy and In Fabric; the focus on ‘human toilets’ in the middle entry of these three is the clearest tip-off about what end of the human body that Flux Gourmet is about. Strickland’s film is the story of ‘sonic catering’, set in a high-end retreat for aspiring chefs that focuses on all aspects of the digestive process, but sound in particular; if you’ve ever observed the foley technique by which breaking celery sounds just like snapping bones, you’re in the right zone.

Our guide to this previously unimagined world, where Fanny Craddock meets David Cronenberg for an amuse-bouche, is our protagonist Stones (Makis Papindimetriou), a writer who interviews the cookery-course participants and suffers from debilitating social problems due to excess wind. Asa Butterfield and Star Wars star Gwendoline Christie play other eccentrics on the same course, while Richard Bremmer plays the sinister Dr Glock, the medical advisor to Stones who is keen to get to the bottom of his bottom. ‘Why did I agree to a public gastroscopy?’ Stones wonders, and you may wonder the same about watching the procedure, with the camera’s view projected on a massive screen for our edification and education. 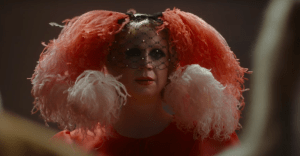 ‘A cake from the past never leaves you alone and then follows you into the shops,’ is a good example of the kind of cryptic dialogue you get here; Flux Gourmet is not a particular digestible dish, and even if you do clean your plate, the rewards are minimal. Having tackled the intricacies of washing machine repair in some detail in In Fabric, Strickland’s admirers will no doubt thrill to seeing characters poring over plans for an ‘analogue bucket brigade delay line’, but Flux Gourmet’s gleeful perversions have less charm or narrative hook than his previous efforts.

One might imagine that you could never tire of watching pretentious people smearing themselves with their own excrement as part of what’s accurately described as a ‘scatological performance’, but while Flux Gourmet takes us beyond the point of disgust, it doesn’t lead anywhere particularly enlightening. While Strickland is an individualistic voice, and his eccentric sensibilities set his work out in their own unique category, each film Strickland has made to date has been more self-indulgent and less involving that the one before, and a long, hard blast of Flux Gourmet’s repellent but toothless satire on foodie obsession doesn’t do much to clear the air.