Or Bridge o the Doomed, which was the actual title on the screener I watched, giving this brisk army vs zombies action thriller a rather more Scottish flavour than expected, somewhere between Robert Burns and William McGonagall. Out tomorrow in North America in time to fire up all bases for the midterms, Bridge of the Doomed bills itself using the old-school 1950’s sci-fi phrase ‘creature feature’, and it’s been wisely held back until after Halloween so that we can appreciate this as less of a horror movie and more of a humble but effective gorefest sci-fi action movie with several winning cards up its sleeve.

Firstly, the show-stopping presence of Michael Paré, which generally means any film he appears in is an automatic must-watch in my book. You never forget your roots, and when I was just a kid finding my way through the world of cinema, Paré was a hot new star in movies like The Philadelphia Experiment, Eddie and the Cruisers (and its sequel) and his legendary work in Walter Hill’s seminal retro-rockfest Streets of Fire. With a mere 217 acting credits to date on imdb, Paré is the kind of smart, muscular actor who you could leave in a room with Eddie Redmayne, Zac Efron, Tom Hiddleston and Harry Styles, and feel fairly confident that only one dude would come out alive; even when he’s not the main actor, as in Bridge of the Doomed, he’s a guaranteed good watch and a rare infusion of non-ironic macho in today’s namby-pamby times. 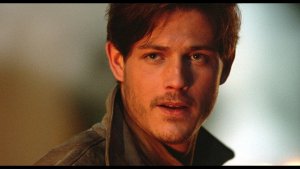 Director Michael Su is a comparative novice to Paré, with a mere 67 credits to his name, but changing direction since A Belgian Chocolate Christmas has clearly sharpened his attitude, and Bridge of the Doomed takes zero prisoners from soup to nuts. We’re in the midst of a zombie outbreak, somewhere between Dawn of the Dead and Day of the Dead, and the military are mulling blowing up a key bridge in the zombie war. The deliberations are in the hands of Robert LaSardo (a whopping 169 credits), whose tough guy face you’ve seen alongside Jason Statham and Clint Eastwood. LaSardo plays hard-AF General Vasquez and Paré provides the assist as Colonel Charon. But in a rare welcome bit of bait and switch, the acting honours go to Kate Watson as tough lady Sgt Hernandez, who has the most dramatic arc of any of the characters and fully deserves centre-stage in the poster above.

Su doesn’t wait until the opening credits are over before launching his first zombie attack, and they’re consistently red in tooth and claw throughout. This is a B movie, sure, but Bridge of the Doomed fits neatly into the world of Max Brooks and World War Z, updating World War II scenarios to the zombie apocalypse. And this IS a creature feature, because there’s something way worse than zombies under that bridge, and it’s a proper old-school monster like the one in Michael Mann’s The Keep. While this Mahal Empire production doesn’t have the expensive studio sheen of ventures like the Dawn of the Dead remake, it’s a busy, energetic combat movie that doesn’t put many booted feet wrong. And yes, although his character is largely off-screen, Paré comes in swinging with LaSardo for the climax, barrelling in like he’s Burt Lancaster and leaving this critic one satisfied customer.

Bridge of the Doomed is out in North America from November 4th from Gravitas Ventures.