Yikes! We’re crawling back into the haunted well for one more ghostly scare before Halloween, but while we’re returning to the found footage genre, Ghostwatch isn’t a horror film at all. Ghostwatch was an ingenious, some might say dangerous television experiment broadcast by the BBC exactly 30 years ago in 1992, and never seen again. With no internet and precious few channels to choose from, huge ratings and household name presenters created must-see live tv events in these days, with live shows like Hospital Watch scoring big. Originally pitched as the final episode of a six episode series, Ghost Watch went out as a live BBC special on Halloween night and caused a lot of people a lot of bother, and this blu-ray premiere offers a look at what all the fuss was about…

Ghostwatch scared a lot of people at the time, and in some ways, it’s hard to see why now; this is very clearly fake news. Unless you genuinely find it possible to believe that malevolent demons were locking presenter Sarah Greene in cupboards or chasing a windswept Michael Parkinson around a BBC studio, then Ghostwatch doesn’t offer much of a frisson in terms of credibility. But that’s just the punch-line; Ghostwatch worked its way up to a ridiculous conclusion, but the way it gets there is still deceptive enough to fool casual viewers for at least a while…

Ghostwatch purported to be live tv, a Halloween spectacular with the lugubrious Parkinson interviewing some semi-convincing experts in the studio, and Greene reporting live from a ‘haunted house’ where the malevolent spirit known as Pipes is terrorising a household’s children on cue. An early trick to ensnare the unwary viewer shows footage of the children in their bedroom, while a  figure looms over them. Concerned viewers called in to the show’s switchboard to say they could discern this sinister shape, but a different clip of film was then played back with the mysterious figure now missing and the viewer concerns were instantly dismissed despite being completely valid. This gas-lighting tactic was clearly designed to freak audiences out, and it worked. Sure, 99 per-cent of viewers will recognise all this as some kind of parody or mischievous joke like Panorama’s famous spoof documentary about a spaghetti harvest, but if over 10 million people are watching, a concerningly large number of viewers will accept this kind of malarkey as fact.

Written by Stephen Volk and directed by Lesley Manning, Ghost Watch is remembered as a taboo tv show that went a little too far; at least one fatality resulted, with a finger pointed firmly in court at the BBC’s irresponsible use of a common household sound (pipes) to suggest imminent supernatural activity. But Ghost Watch’s notoriety reflects just how blindly trusted a source broadcasters were back in the 90’s; by suggesting some kind of Nigel Kneale energy unleashed by the show itself, linking the psychic ‘connection’ of the audience, Ghostwatch went too far in deliberately destabilising the mood of the nation. Less frightening than fascinating, Ghostwatch is a weird harbinger of the found footage era, and a challenging, edgy television show, the likes of which will never be allowed on the air again…

Thanks to 101 Films for advanced access to this title. Link and description below. 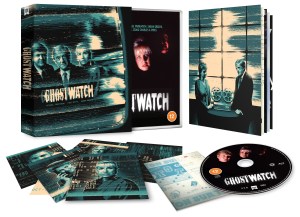