Let’s get political, or rather, let’s not; let’s get personal instead. The traction of this blog has yielded all kind of unlikely fellow-travellers; LA-based writer. producer and director Janek Ambros is one of those encountered along the way. Ambros sent me his super-gonzo freak-out Mondo Hollywoodland film for perusal; the review is here. At the time, I made some fun from the executive producer credit for the popular actor James Cromwell, who I suggested that Janek had tied to a chair in a basement somewhere; in reality, Cromwell, is a renowned actor and activist and clearly the two men share something in common in a desire to use film to raise awareness of real-world issues.

In correspondence, Ambros also dropped another name; Krzysztof Zanussi, a legendary Polish film director that I’d previously entertained at a Polish club in Glasgow, it’s the equivalent of walking into A Scottish bar with Rod Stewart on your arm; a guaranteed riot of genuine bonhomie and genuine affection. So Ambros’s impressive credentials were what drove me to catch up with some earlier and current work. His Imminent Threat doc was made back in 2015, but unlike some documentaries, seems more pertinent now than it would have done at the time.

Looking at serious issues of how governments interfere with our civil liberties through war, economics, drone strikes and more, Imminent Threat is a refreshing watch from a 2022 POV because it doesn’t skew according to the tribal party lines that are currently tearing America apart. Instead, it’s recognised that this wide problem permeates most political stand-points, and while there we’re currently sifting through a mountain of firm evidence of how forces within the Trump ‘presidency’ sought to stop democracy in its tracks, Imminent Threat goes back to the source and demonstrates how such potentially authoritarian desires are a symptom of a wider problem through a mixture of cross-party interviewees and well-edited archival material; Cromwell exec-produces again. 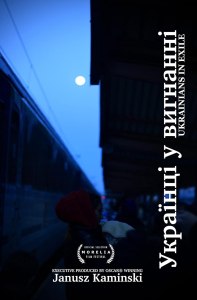 Coming up to date, Ambros has also created Ukrainians in Exile, (**** 4/5) a short film currently on the festival circuit dealing with the on-going war in Ukraine; it’s narrated by a Ukrainian, who we’ll call Anya to retain her anonymity. From Ukraine, she offers a heartfelt view of the conflict from the perspective of exiles in the border town of Premsyl, Poland, and this short, six minute film seeks to articulate her view. The great cinematographer Janusz Kaminski was willing to lend his name to this effective little film to help get it to an audience. Sure, there are wider geo-political issues about Ukraine’s predicament that aren’t covered here, but what we see is a valuable primary source, and both films offer compelling evidence that while war should always be the last option that a civilised world will consider, the gradual erosion of our civil liberties is just as chilling and signifigant a threat.