‘Man is like a candle, he must radiate life by burning himself,’ Which great thinker uttered this profundity? Gandhi? Churchill? Ronan Keating? Well, if you wrote Ankar Moor from Deathsport down as your answer, give yourself a big pat on the back because these are indeed the wise words of the nemesis featured in this largely forgotten entry in the future-sport genre.Yes, back in the wild days of the mid 70s, the culture wars included anxieties about how violent and influential organised sport had become, with Rollerball and Death Race 2000 offering a prima facie case. The iconic Death Race 2000 was a Roger Corman production, and buoyed by that success, Corman wanted the same again with motorcycles instead of cars, and another lead role for star David Carradine.

Death Sport, despite equally lurid advertising, can’t in all honestly be said to have the wit or vigour of Death Race 2000, but that’s not to say it’s devoid of interest; any project that boasts Jerry Garcia’s work on the soundtrack, googley-eyed mutants and the sheer volume of exploding motorcycles features here cannot be a dud. But the actual Deathsport featured, a kind of desert arena with combatants swinging weapons on motorcycles, only appears in one section of the narrative, offering a bait and switch for those who bought into the idea. 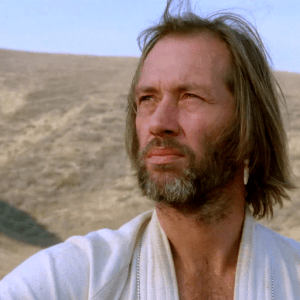 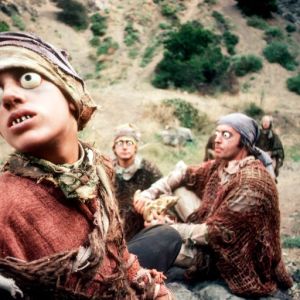 It’s years after the Neutron Wars, or possibly, the Neutron Dance, and society has collapsed around the ears of Kaz Orshay (Carradine), a drifting warrior of the wasteland. Lord Zirpola (David Mclean) orders the state of Helix into conflict with the state of Tritran, a conflict to be fought via Deathsport ie on ‘destructocycles’ on a minefield with various motocross stunt-traps. Oshay teams up with Deneer (the great Claudia Jennings) and busts his way out of the competition, much to the chagrin of Ankar Moor (the equally great Richard Lynch) who wants them both dead.

‘Taste my blade!’ gives some idea of the level of dialogue here; actors and crew give a good impression of being uniformly ripped out of their knitting throughout. From most accounts, Carradine’s weed intake was reputedly prodigious during filming, and Jennings had a cocaine problem that probably didn’t help. Deathsport was cobbled together by co-directors Allan Arkush and Corman when original choice Nicholas Niciphor didn’t warm to the task; the result is a somewhat slipshod venture that’s certainly fun if you enjoy a good-bad movie, ideally presented here by 101 Films.

Deathsport is out now on blu-ray for the first time in the UK. The blu-ray features commentary from co-director Arkush and editor Larry Bock. Link and trailer below!