Watched in a nostalgic whim, this 1975 tv movie was a pilot for what would become a hit show, the continuing adventures of cops Starsky and Hutch. Played by Paul Michael Glaser and David Soul, Dave and Ken are such straight-shooters that they make Serpico look lackadaisical; they pride themselves on being the best they can be, and accept a certain collateral damage along the way as long as the fictional Bay City perps get nicked. 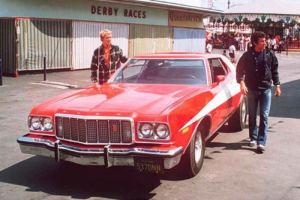 Of course, Starsky and Hutch had more in the locker than just the charisma of the two leading men; there was a car, a 1975 Ford Gran Torino, red with a white stripe, and still a nice bit of kit. Named Zebra Three, the car features in a car chase here, shifting acres of white paper as it roars down rubbish-strewn streets to satisfying effect. The story opens with a couple being gunned down in a similar car; the cops think there’s an attempt on their lives of their favoured sons, and as they try to figure out who their opponent is, Starsky and Hutch rebound off various parties, including feel-good snitch Huggy Bear (Antonio Fagaras) and Frank Tallman, a crime boss who they are due to testify against, played by Gilbert Green. Our boys corner him in a sauna where they share Havana cigars as Tallman explains the modus operandi for his crime empire, which could be straight out of Tom Burgis’ recent book Kleptopia: How Dirty Money is Conquering the World.

‘Let me tell you how it all works. If you testify, I will be found guilty. Because, as we all know, I am guilty. My lawyers will ask the judge to fix bail, which will be an outrageous sum, which I can pay and be home in time for cocktails. Then my lawyers will appeal, and the appeal will be denied. Then they will appeal higher up, and that appeal will be denied. The case will drag through the courts, for five or six years…sure the courts may find me guilty, but years after I’m dead… I should be able to weather the disgrace of it all…’

So while it’s easy to enjoy the bromance antics of our heroes, there’s a raw cynicism about the world of cops and robbers here that’s deeper than expected for a tv movie. While the mystery is satisfying, and the resolution is good enough to spawn a four season ratings bonanza, the impossibly dangerous world of yer actual law enforcement is well-captured here; Starsky and Hutch may win a few minor battles, helped by their supercar and street smarts, but the guys at the top always seem to get away with it, and not much has changed today…