Yikes! Let’s get back to a venerable franchise, the Road movies were box office gold back in the 40’s and 50’s; their last gasp was this very 1962 venture which teamed Bing Crosby and Bob Hope for one last hurrah. Dorothy Lamour was deemed too old for anything more than a supporting cameo, and replaced with youthful ingénue Joan Collins, and that’s part of what annoyed Road fans. But there’s also a whole lot of other issues with Norman Panama’s film that make it largely unsuccessful, and yet there are a few grace notes of genuine interest.

The Road to Hong Kong looks and feels like a Bond film, which is all the more surprising because it was released a year before Dr No came out. So despite the Maurice Binder title sequence and the story about a sinister organisation named The Third Echelon and their efforts to take over the world through the space programme, any inspiration must have come from the general spy cycle and Ian Fleming’s James Bond books rather than films. So Bing and Bob are, you guessed it, aging vaudevillians who somehow get accidentally inducted into the space programme, and become espionage agents in the process. 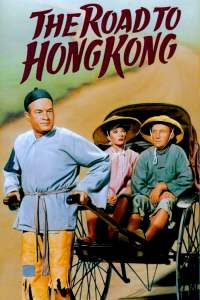 Although the previous Road movie (Utopia) was in colour, somehow we end up back in black and white here, but this is hardly a cheap shot, with guest spots from Frank Sinatra, Dean Martin, David Niven and Peter Sellers, the latter reprising his Indian-doctor routine complete with ‘goodness gracious me’ catchphrase. To be positive, Sellers hits the mark with his contribution, and there’s a few choice lines. ‘Who pays the tab on the pad, who signs the scrolls?’ asks Crosby about their accommodation, while Hope alludes to drug culture with his “I think he rolls his own’ putdown. And exchanges like ‘I want you, body and soul…They are available in that order’ still hold up well today.

What’s not so great is the racist stereotypes about the Far East; ‘What is this, a Chinese minstrel show?’ one character asks, and at times, they’re not far wrong. The low point is a rip on the factory scenes of Chaplin’s Modern Times, with our two astronauts filling in for space-monkeys and enduring the indignities of a forced banana eating scene. ‘I’ll never look at another banana split again’ quips Hope, and such lame gags form a background to an oddly subdued romp that’s for pop-culture specialists only.