Dreams are a great cinematic staple; from Hitchcock’s Spellbound to Chris Nolan’s Inception, the mystery of what goes on in our nogs while we’re asleep is a subject that’s regularly addressed. Wim Wenders explored the idea of recording our dreams in his seminal Until the End of the World, and some similar technology turns up in abstract indie fantasy Strawberry Mansion, a Sundance premiere that has a touch of Michel Gondy’s oddness and a welcome serving of ethereal romance..

Written and directed by Albert Birney and Kentucker Audley, Strawberry Mansion isn’t an easy film to summarise, but here goes. It’s 2035. The government have developed intrusive technology that allows them to tax our dreams. James Preble (Audley) has exactly that task, and arrives at Strawberry Mansion, the bucolic home of Arabella Isadora (Penny Fuller) an elderly woman who lives with her pet tortoise and has managed to record her own dreams on VHS tapes. Preble, symbolising how the government may know the value of everything and the importance of nothing, begins to burrow through a mountain of VHS, and starts to dream that he’s falling for a younger version (Grace Glowicki) of the artist in his dreams, and even after Isadora dies, their relationship continues… 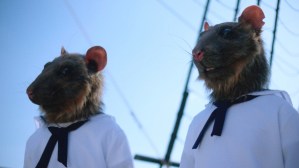 The idea of falling in love with someone in a dream was previously explored in an equally enigmatic way in Alain Resnais’ arthouse classic Last Year in Marienbad, but not with the garish, poppy visuals featured here; there’s blue demons that look like they’ve popped over from a live-action Power Rangers series, there’s giant sailor rats, people turn into caterpillars, it’s not always easy to tell what’s going on, but maybe that’s right for a film that’s about the tortured logic of the dream.

That commitment to the weird and abstract world of the mind means that Strawberry Mansion is consistently engaging, but not always empathetic to watch; it’s hard to root for the characters when the narrative is so deliberately off-kilter. But Strawberry Mansion is always something of a treat to watch, with loopy, gloopy Alice in Wonderland visuals that may be lo-fi, but give the film a fairly unique visual quality. Strawberry Mansions is a very odd and often endearing film; if you’re in the mood for something very strange but also rather likeable, Strawberry Mansion is the place to go.

Bulldog Film Distribution presents Strawberry Mansion in select UK cinemas and on demand 16 September. Thanks to Bulldog for advance access to this title.