The brainchild of producer Owen Crump, 1971’s Zeppelin is a good old fashioned WWI action fantasy, lavish for its time, and still packing enough style and swagger to be worth a look in 2022. Michael York plays Geoffrey Richter-Douglas, and if you think that’s a mouthful, you’re right. His character is supposedly German-Scottish, but he’s enlisted by the top brass in London to join the fight against the plotting Germans by going undercover on a zeppelin mission.

Having established that undercover zeppelins are dropping bombs all over Blighty in the opening scenes, we might expect this film to be about a mission to stop deadly zeppelin raids or even production, but there’s a quick science lesson to show us why they’re so hard to shoot down. Richter-Douglas heads off to German and infiltrates a secret mission; the Germans are heading over to Bonnie Scotland in the hope of stealing the Magna Carta, which is apparently hidden in a local castle. Richter-Douglas manages to stop his cover being blown, but does he have what it takes to Die Hard his way out of the heist and stop the zeppelin mission in its tracks. 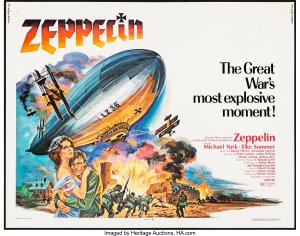 With a booming Roy Budd score and some not-bad visuals of the zeppelin taking off and landing, this technically passes muster as a well-upholstered action romp. The support cast is also rich; Alexandra Stewart and Elke Sommer provide the glamour, the latter as a zeppelin scientist, and there’s war movie stalwarts like Andrew Kier, Marius Goring, Anton Driffing and even the original Maigret, Rupert Davies. Dr Who star Fraser Hines even has a bit as a radio operator who gets chucked out of the airship while in flight.

Of course, absolutely none of this actually happened, and the mission is fictitious; there’s an odd foreshadowing of Raiders of the Lost Ark in depicting a German search of an ancient artefact, and things move at a reasonable clip to a firey, all guns blazing climax. Zeppelin is old-fashioned to a fault, but looks handsome in widescreen and HD, and is worth a look when modern cinema is getting you down; it’s a romp, but not too silly and apart from some pitiful blue-screen, generally keeps the British end up without crashing and burning too hard.