The difference between streaming and cinema grows smaller; DC League of Super-Pets arrives in our homes while it’s still the number two cinema attraction in the UK. That shortened window can’t be good for exhibitors; kids films in particular used to run for a solid three months before they moved to our home-screens permanently. Perhaps you might feel the potential death of cinema is social Darwinism in action. But if our cinemas close, so do the retail parks, coffee shops, restaurants, car parks and the whole eco-system that surrounds them; never mind the lost jobs, we’ll be trapped at home in our veal-fattening pens without any other options if we continue down this kill-joy route.

Leaving that aside, any movie that features a cast like this has to have appeal; The Rock, Jermaine Clement, Diego Luna, Olivia Wilde, Daveed Diggs, Lena Headey, Ben Schwartz, and Kate McKinnon all feature here, marking a considerable array of hot talent. Throw in John Krasinski as Superman and a perfectly cast Keanu Reeves as Batman, plus a breakout character for Natasha Lyonne, and at least adults will have fun spotting the voice-over work. Otherwise DC League of Super-Pets is a lightweight and generally agreeable time-passer for family audiences; riding on the coat-tails of existing IP, it’s jolly stuff much like The Secret Life of Pets or Sing, but with a superhero flavour.

Sure, films like Zoltan, Hound of Dracula have gone down the ‘pets of the famous’ route before, but this DC product has a wider scope. We start initially with a ret-con of the opening of the 1978 Superman film, now with an added dog Krypto (The Rock) who is sent to Earth with his master Superman (Krasinski) on the solemn command of Jor-El (Molina). Super-man and super-dog get along just fine, but when Superman develops romantic feelings for Lois Lane (Wilde), his loyal mutt starts to worry. And with Lex Luthor (Marc Maron) imbuing a group of pets with super-powers, matching up talented creatures to super-hero owners becomes the only way to save the day. The only problem is that the super-heroes are trapped, and their pets must band together to save them. 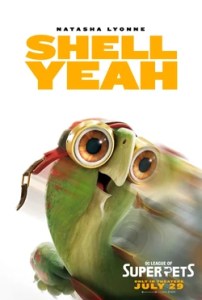 ‘What is this, Paw Patrol?’ asks one character, and DC League of Super-Pets certainly skews towards younger audiences. It’s nice to finish on a slogan like ‘Be a hero, adopt a pet’ and for once, instead of a list of production babies, Jared Stern’s film ends with a list of the crew’s very own pets. The MVP here is Russian Doll’s Natasha Lyonne, who makes something genuinely hilarious out of Merton McSnurtle/Terrific Whatzit, a superhero turtle constantly on the lookout for romance, albeit in all the wrong places with potential partners including a construction-worker’s helmet or a Garfield in-car window clinger. Lyonne has a perfect rasping voice for this kind of wheeze, and if we can spin things off as far as DC League of Super-Pets, we can surely spin-off a Merton McSnurtle movie; this character has been going since before WWII ended, but comes up fresh as paint here.

Thanks to Warner Brothers UK for providing advance access to DC League of Super-Pets, out now on streaming, also on blu-ray and DVD from Oct 10th.