Indie movies are an established part of the beat of this blog; spotting up and coming talent, seeing personal films not written by committee, catching new actors and fresh takes on current subjects; what’s not to like? But right now, the eco-system of cinema as a whole is under threat, and VOD platforms are now the last refuge of the once proud indie. You can get the film to an audience, but can you get them to watch? In the case of Jeff Hindenach’s debut feature Lost Inside, it’s a point worth stressing, because although there’s no obvious box-office draw for this tight, unpretentious drama, it’s well worth a recommend.

Crisply shot in San Francisco while the pandemic raged, Lost Inside is a story of recovery; Spencer Scruggs plays Benji Williams, a washed-up rock star who has become a recluse by choice, smarting after a full-on Jackson Maine break-down at an awards show and a freak out in a Chinese restaurant that we’re fortunate to be spared. Williams mooches around his spartan apartment, playing video games, surfing the net when he has to and generally trying to have as little contact with the outside world as possible. Jordan Tyler (Garret Ryan) is his imaginary friend, or frenemy to be exact, since Tyler generally needles Williams about his lost potential, and this thorn in his side extends to flicking his cigarette ash into the urn containing the ashes of Williams’ late mother. 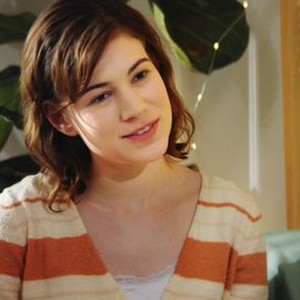 The dynamic changes when gal-next-door Sylvia (Serra Naiman) forces her way gently into Williams’ life, winning him over with a gift basket and some warm companionship that seems to shift the heavy sediment of self-absorption in his mind. But as they sit on the emotional no-man’s land of his doorstep and chat, is Sylvia as kind as she makes herself out to be, can she be trusted, and is Williams ready to set aside his own genuine pain and leave the house?

Although Hindenach’s film is largely housebound, it does eventually expand to include other characters and locations, but first we have to feel the tight enclosure of his flat, and how Williams and his combative relationship with Tyler both helps and hinders his recovery. It’s a big gamble to restrict the scope of the film so tightly to the protagonist’s POV, but although Lost Inside is a little slow to start, it does capture something of the feel of being a recluse.

Lost Inside is a tight, well-played little indie rom-com that has plenty of insight into depression, recovery, stardom and fandom in 2022; it says more about these subjects than most tv or streaming services do, and that’s because Hindenach observes his characters with humanity and wisely allows them some space to develop and grow organically. And for once, this is a low-budget indie film that’s well-lit and framed by cinematographer Unni Rav, perhaps reflecting the director’s ongoing work as a photographer. The loneliness of the reclusive rock-star might seem be something of a cliché, but Lost Inside revitalises such clichés and makes for an enjoyable 90 minutes of soul-searching with a positive resolution.

Lost Outside is out now on US platforms including Vudu, Vimeo, Googleplay, AppleTv and Amazon.