Still worth celebrating, series 2 of Only Murders in the Building is still a class act, even if the freshness of the first entry needs a little rejuvenation this time around. Steve Martin, Martin Short and Selena Gomez return as the podcasting amateur detectives who are investigating killings within the Arconia building deep in posho Manhattan territory. It’s a whodunit, but it’s also a parody of a whodunit, and some classy writing, game guest-stars and a generally amusing conceit make it feel largely cut from much the same cloth at the opener.

Of course, we had a cliff-hanger to start with; having just solved the initial mystery, our three sleuths are celebrating on the roof with champagne when Mabel (Gomez) heads downstairs to get some more bubbly. The building is abruptly evacuated when Charles (Martin) and Oliver (Short) find Mabel, who’s covered in blood and appears to have stabbed fearsome super Bunny (Jayne Houdyshell) with a set of knitting needles.

Who is the killer? Sting has just moved out of the building, taking his rain-sticks with him, but could new neighbour Amy Schumer be responsible? Or could the blame fall on Bunny’s mysterious sister Rose, played with considerable elan by the remarkably well-preserved Shirley Maclaine? Or does Mabel’s new artsy British friend (Cara Delevingne) have her own reasons for getting intimate with her? The suspects pile up, and with Tina Fey’s podcaster ready to scoop the story, the Only Murders team have to sort out all their own personal problems to get a clear view of the crime-scene. 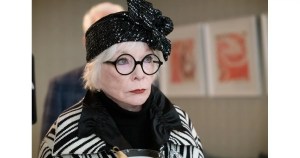 There’s a clever device in Only Murders that Italo Calvino might have approved of; each episode of the series equates with an episode of the podcast, allowing the characters to discuss the show in a meta way. There’s also a Greek chorus of geeky fans of the podcast, dismissively treated by pretty much all characters, but again allowing for some post-modern commentary on the show itself. Such devices might sound arch, but they help smooth over the cracks in the story that relies a little too much on backstory gossip about absent fathers and paternity tests and doesn’t quite have the urgency of the first series.

Yet the big finale does feel like a big finale, even if the final reveal of the killer is a little underwhelming and the motivation seems weak. But the final scenes, promising a third series, don’t land well at all, notably breaking the rules by featuring a murder OUTSIDE the building. Maybe they’ve got a great third series written and ready to go, but it’s be a shame if standards at the Arconia start to drop as we enjoy this consistently witty and moreish celebrity show.

Thanks to Hulu for advance access to this show. Hulu in the US, Disney+ in the UK.