It’s 10am; do you know where your nuclear weapons are? The wheels had well and truly come off the Superman franchise for some time before Sidney J Furie’s final entry in the Christopher Reeve era; what’s notable here is how many of the original cast are still on board for this famously awful film. Of course, arriviste studio Cannon were desperate for respectability, and the Superman franchise was one expected to generate a solid family friendly hit, even if Superman III was considerably bent out of shape by being reworked to showcase the comic talents of Richard Pryor, a great performer, but hardly the right fit for a Superman movie.

The fourth movie does have an interesting premise; what if Superman took an interest, not in costumed foes, but real-world issues like the nuclear arms race? The discussion of violence in Todd Phillips’ Joker movie has some vague precedent here, but Superman IV doesn’t go down that road at all. In fact, the movie doubles down on ludicrousness as Superman dutifully gathers all the world’s nuclear weapons, rolls them into one big ball and shot-putts it into the sun. 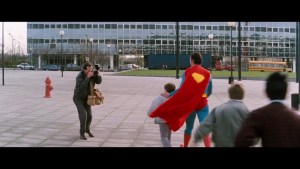 Superman does this after making a speech at the United Nations, which, for reasons which can only be to do with penny-pinching, is evoked by using the brutalist exteriors of Milton Keynes shopping centre in England. The real drama, if that’s the right word, doesn’t kick off until plutocrat Lex Luthor (Gene Hackman) takes advantage of the absence of nuclear weapons to create Nuclear Man (Mark Pillow) who looks somewhat like Trey Parker circa 2002 and not much of a threat at all.

At the climax, Superman and Nuclear Man fight on the moon in a blaze of sub-standard special effects; co-star Jon Cryer felt that the film was physically unfinished, and on this evidence, he’s probably right. Spotting randos Jim Broadbent, Mariel Hemingway and Robert Beatty amongst the cast adds to the fun, and it’s strange seeing such an iconic cast reduced to phoning it in for a pay-check. Today’s more sophisticated superhero movies have come a long way from this low-point for weapons-grade barrel-scraping, but for bad movie fans, the remarkably tatty Superman IV offers a bottomless pit of amusement.