I’m as confused as everyone else about the increasingly blurred line between streaming and cinema; for Warners to spend a fortune making a Batgirl movie, then not releasing it in any format because it lacks ‘spectacle’, suggests a world where financial trickery is wagging the artistic/commercial dog. It seems equally mysterious that the fifth entry in the Predator franchise, discounting the Alien vs Predator dreck, would go straight to streaming, particularly given that Prey is probably the most coherent single entry in the series to date. Dan Trachtenberg did such a bang-up job with 10 Cloverfield Lane that getting a crack at the Predator franchise was a just reward; it’s certainly a huge step up on Shane Black’s horrific-for-all-the-wrong-reasons 2018 reboot. So are new movies just a tool for adding lustre to paid streaming services in a dog-eat-dog industry? Never mind that, we’ve got bigger fish to fry in Prey, out now on Hulu in the US and Disney+ elsewhere…

After a notable break-out role opposite Liam Neeson in The Ice Road, Amber Midthunder was clearly destined for greater things; in Prey, she plays Naru, a fearsome Comanche warrior back in the Northern Great Plains circa 1719. With a kick-ass dog, super-skills with her tomahawk, and plenty of agency, Naru is a pretty cool heroine, but she’ll need every bit of fighting skill she’s got. A vision of a thunderbird in the cloudy sky announces the arrival on earth of a Predator, an alien with a taste for hunting the kind of things which can hunt you back, and boasts a groaning sideboard of skulls belonging to creatures who thought they could best it. Naru’s brother, her own tribe and a band of French voyageurs get somewhat in the way, but after an hour or so of preliminaries and introductions, Naru squares up to the Predator in fairly dramatic fashion for our main bout.

Prey is getting positive notices, and rightly so; with no cameos, call-backs, nostalgia or spurious world-building, it’s something of a relief to focus on an old-school manu-manu, or maybe manu-Naru confrontation. The predator design, both in stealth mode and in its full reveal, is much improved to the point of being cool AF and the whole film feels more like a remake of the first entry, with a gutsy female protagonist and a lot less hanging down in the male camaraderie department. Fortunately, Midthunder is more than up to the task of making Naru a smart, agile and resourceful character that’s a no-brainer to get behind. 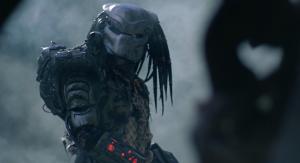 Prey doesn’t do much to expand the Predator world, but it does circle back to make more sense of what we’ve seen; the way the creature thinks and hunts is more evolved and sharpened here, and Trachtenberg does well with the big action climaxes. If you want the cheesy fun of the original Predator, then stick to Arnold and machine guns; Amber Midthunder is the real star here, and if you don’t like that, get out of her way, because she’s absolutely taking no prisoners, and neither does this gory, violent, ingenious film.