The Jan 6th Committee have generally been serious as surgeons, but there have been moments of surprising levity; Sidney Powell chugging diet Dr Pepper like Popeye eating spinach was a highlight, as was Bill Barr’s film review of 2000 Mules. Republican Rusty Bowers outdid them all by dropping a wilfully obscure pop-culture reference, describing Trump’s wildly incompetent gang with the film title ‘The Gang That Couldn’t Shoot Straight’. That same film was referenced in ‘making of the Godfather’ miniseries The Offer on Paramount +, when Albert S Ruddy swaps the casting of Al Pacino and Robert De Niro around to allow the former to play Michael Corleone and the latter…

…well, De Niro got the short straw by getting Pacino’s role in this, but in the hope that I’d missed a minor classic, I decided to find out what absolutely everyone was talking about and watch James Goldstone’s 1971 comedy/thriller. Based on Jimmy Breslin’s book about gangster Joe Gallo, this is a cartoonish character-comedy which has a lot of shouting and face-pulling, and a high death toll, and yet it’s hard to see why we’re still talking about it 50 years later, since it’s fairly dated stuff. Screenwriter Waldo Salt squeezed this in between his more celebrated work on Midnight Cowboy and Serpico, but this gangster opus isn’t cut from the same storied cloth. 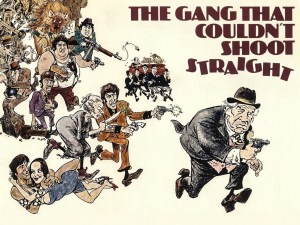 Despite the brutal NYC locations, the bumbling gang themselves look like the Ant-Hill Mob from Wacky Races, led by Kid Sally (Jerry Orbach from Law & Order). Sally is asked to organise a six-day bicycle race (which we don’t see) but his gang are incompetence incarnate and somehow end up kidnapping an actual lion which they keep in the basement of their headquarters to munch on their adversaries. Meanwhile, seemingly in another movie, Robert De Niro plays light-fingered thief Mario Trantino, who is igniting a relationship with Angela (Leigh-Taylor Young) who is the daughter of Sally’s boss Baccala (Lionel Stander, gorgeous as always). Dated comic complications ensure.

The goofy gangsters storyline doesn’t catch up with the earnest romance until the last 30 minutes, but only the most hardy, determined viewer will make it that far; The Gang That Couldn’t Shoot Straight may still be a by-word from criminal incompetence, but this gang don’t bring much in the way of funny by today’s standards. Violence towards women, upskirting teenage girls, dwarf comedy (Fantasy Island’s Herve Villechaize is a member) and several sequences in which a clearly unhappy lion is forced through such indignities as a car-wash would rinse the smile from anyone’s face. Some films are classics, others are just foot-notes in history; despite a game cast, The Gang That Couldn’t Shoot Straight’s aim is as wayward as the title suggests. It’s currently on 0 percent on Rotten Tomatoes as I write this, and once I’ve posted my review, that score won’t have changed.