Also known as Prizefighter: The Life of Jem Belcher, this lush period production was bought by Amazon Studios, and is that cinematic staple, the boxing movie. But it’s a boxing movie with a neat twist; by doubling down on the detail of boxing history, Prizefighter transcends the expected cliches and packs a genuine punch as it uses blood and sweat to paint a vivid picture of a real sporting champion. Not everyone will be as interested in boxing history as the creative behind this film obviously are, and the film has a troubled production history, but Daniel Graham’s film does a good job of dramatizing Belcher’s conflict, while not stinting on the big, bloody, climactic fight.

Yet there are times in Prizefighter that it seems unlikely to get to any kind of climax at all, and that’s a testament to the bitter, aggressive feel of the film. Matt Hookings plays Belcher, who we first encounter as a boy under the tutelage of his wayward grandfather, the legendary Jack Slack, played by the similarly legendary Russell Crowe. Always a formidable form, Crowe has been on a sweet streak of late, and gets a good, half an hour in of unrefined salt as Belcher’s rugged first coach. The ‘Micky’ mantle is passed to Bill Warr (Ray Winstone), who has a memorable scene in which he compares his mentoring work to his regular placement of seagulls nests on the coastline; he elevates, or at least likes to think he does. Belcher may well have noted that the seagull has little choice in the matter, and this lack of agency becomes an issue as Belcher’s initial success as a bare-knuckle boxer in Britain leads to him losing his mojo and falling on the hardest of hard times. And yet the ring still beckons… 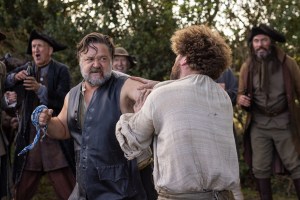 I’ll attach a vague spoiler here, because although Belcher’s death isn’t really covered by the film, he died young by today’s standards (30), and what the film covers with great success is why he didn’t last. Life messes with Belcher, and like many sportsmen, he’s too young and inexperienced to avoid the fleshpots and diversion of celebrity. Knowing that Belcher died prematurely for a man of his obvious physique makes this more of a drama than a straight sports movie, and that adds a layer of hard-earned pathos to Belcher’s story.

Despite a healthy smack of old-school sex and violence in a period setting, Prizefighter is never just Bridgerton with boxing, with Hookings not overawed by his co-stars, and giving a good account of a man increasingly and rightly wary of what’s to come. With visceral action tightly tied to a compelling human story, this is a muscular and thoughtful film that should have been seen in cinemas. Prizefighter is a boxing movie that manages to exceed our expectations; with concussion injuries raising major questions about some of our best-loved sports, there’s also an added topicality here.

Prizefighter is streaming on Prime Video in the UK from 22 July 2022.