Alberto De Martino’s 1977 travesty Holocaust 2000 is another bad movie for the ages. Whether you know this film as Rain of Fire, or The Chosen, whatever way you slice your collops, it’s a complete turkey. If you’ve come across Stridulum (aka The Visitor), God Told Me To, The Medusa Touch or other entries in ther late-70’s demonology cycle started by Rosemary’s Baby and The Omen, you’ll know what to expect; big stars, gibberish dialogue, mad visuals and a package of strange elements that add up to a bad day at the office for all concerned.

Holocaust 2000 features Kirk Douglas stitchless in three different realities at the same time, including a massive salt lake in which he is menaced by a seven headed hydra. And that’s not the least of his problems; Douglas plays Robert Caine, a ruthless industrialist attempting to use nuclear fusion in the middle east. Caine’s wife is pregnant; could her son turn out to be the Antichrist, or could he be our salvation? Or could his existing son (Simon Ward) be the Antichrist? Who else could it be? 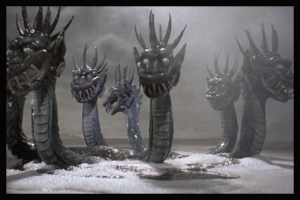 Either way, people are coming to nasty ends; poor scientist Anthony Quayle gets chopped in two, while a local politician has his melon exploded by the rogue blade of a parked helicopter in a quite remarkable sequence that still holds up today. Randos include Dennis Lawson, Geoffrey Keen, Adolfo Celi, Alexander Knox and Virginia McKenna, but no-one can make head nor tale of the pseudo-religious sci-fi claptrap they’re asked to spout.

Holocaust 2000 has a vaguely interesting background; there’s a big worldwide conference coming up, and protestors have taken to the streets to complain about the dangers of industrial exploitation of the environment. Caine’s blowing up religious sites to make way for his power-plants clearly marks him out as having a lesson to learn, but the sci-fi/supernatural hi-jinx here are so muddled as to make any moral obscure. Instead, all audiences can do it sit back and love the bomb that Holocaust 2000 is; it’s absolutely nuts.