It’s been a super-serious week at film-authority.com, dishing out five star reviews to well-deserving stone-cold classics. But that’s not the only string to our bow; after such a groaning banquet of cinema, perhaps the time is right for a palate cleanser in the form of some ridiculous trash, and Daniel Petrie’s 1978 blockbuster is as trashy as it gets. The model seems to have been The Godfather; star Laurence Olivier nearly played the patriarch in that one, so why not put him central stage as the car-manufacturing tycoon in this Harold Robbins adaptation? And why not grab some up and coming talent to match; maybe Pacino and Caan aren’t interested, so lets look forward with rising star Tommy Lee Jones and yes, let’s bring back Robert Duvall in a similar role to his Godfather consiglieri, except it’s rubbish.

As a result, The Betsy, has, as Stefon used to say on SNL, absolutely everything, racing car accidents, a John Barry score, gratuitous nudity, Inga Swenson the comedy maid from Benson, Joe Wiseman aka Dr No, Paul Rudd, (but not the Paul Rudd you’re expecting), that thing where Robert Duvall appears in racketball shorts and appears three feet shorter than the rest of the cast, Tommy Lee Jones sporting what looks like a training bra, Mr Gilmore from The Gilmore Girls, and a debate about the difference between jelly and jam. It’s an absolute must see for fans of bad movies. 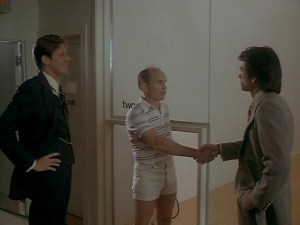 So The Betsy’s story is reasonably simple; Loren Hardeman Sr (Olivier) is an ailing tycoon, a Big Daddy figure out of Tennessee Williams and played with wavering accent by Olivier. ‘Our business is still caaaiirrrsss!’ Hardeman explains to his family, ‘The necks funeral I wan to attend is my yawn.’ Hardeman is cracking his whip on his team who are designing a revolutionary new car known as The Betsy, although their focus seems to be on a prototype the size of a pedal car that seems to be made out of marzipan. Hot shot petrol-head Angelo Perino (Tommy Lee Jones) is brought in to oversee the project, but falls for Hardeman’s daughter, also called Betsy, and then again for passing royalty in the form of Lesley-Anne Down as super-glam Lady Bobby Ayres. Confused? You will be; watching this film is like speed-reading a bestseller by flashes of lightning, and the result is an RTA x 10, mainly because of the dialogue, which regularly astonishes. 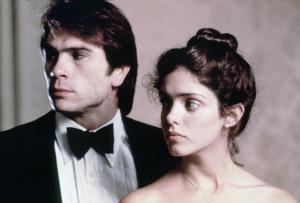 ‘Divorce becomes you, Alisha, I must say,’ offers Tommy Lee Jones; he’s a great actor, but nothing can be done to save a line like that. ‘Couldn’t we at least meet at your convenience,’ is another belter, and the clincher is when Perino spots Hardemann on the massage table and quips ‘What are you rubbing him down with, sulphuric acid?’ Cinema and soap opera are two different things, and The Betsy creates an Edsel for the ages by mixing the two up. The Betsy is a lemon all right, with an awful incest subplot that strains credulity, but approached in the right state of mind, it’s certainly something to behold. And although I rarely screen-shot content to support my reviews, I feel duty-bound to include the shot below, which comes from a scene in which Perino is given a tour of the car-manufacturing plant. Either my eyes or going goofy, or Greedo from Star Wars appears to have a part-time job here… 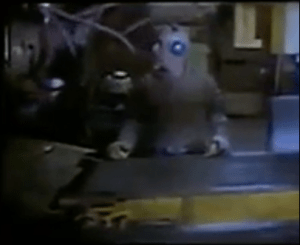