‘Mary Queen of Scots Got Her Head Chopped Off’ as Scottish poet and playwright Liz Lochhead noted; in the days before social media, getting cancelled wasn’t something you could easily take back. Mary Stuart didn’t have much luck when it came to men, family, or being a royal; her unhappy story, or at least part of it, is always with us in school-yard chants and popular culture. The much-hyped Margot Robbie/Saoirse Ronan drama didn’t quite take flight, so it’s worth taking a look back at another Hollywood retelling of Mary’s story, Charles Jarrott’s equally historically inaccurate 1971 version which is released this week in a spanking new blu-ray from the British Film Institute.

Screenwriter John Hale was something of a history specialist, working on Anne of a Thousand Days as well as notable tv series Elizabeth R, with the always awesome Glenda Jackson as the Tudor queen. This movie sees Jackson reprise her role as Elizabeth, and in the opposite corner, English rose Vanessa Redgrave plays Mary Stuart, with the action starting as Catholic Mary returns from France to Scotland after her husband’s death, sending red flag alerts at Liz’s court. The English Protestant-raised  queen has her own issues to deal with, but fear that Mary might raise an heir, and an army, lead her to send up a dangerous disruptor in the form of Henry, Lord Darnley (Timothy Dalton), and chaos predictably ensures….

While Jarrott’s film may not be the definitive version of Mary’s story, one as yet untold from a Scottish perspective, it certainly covers most of the key action; the febrile atmosphere of religious hatred and spy-games is well caught, with Ian Holm as Rizzio, the court favourite who we’re told is a papal envoy in disguise. Rizzio gets violently dispatched as Elizabeth meddles in Mary’s court, and her love-life, and we move through the gears on our way to the cruel circumstances that led to Mary’s end. For a story full of passion and betrayal, Jarrott’s version is rather stuffy in places, but blu-ray brings out the best in the lush settings of this Hal B Wallis production, including Hermitage Castle in the Scottish borders. 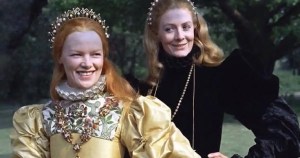 As always, the movies have Mary and Liz meeting on multiple occassions, but you don’t have to be a historian to know that this never actually happened. Redgrave does sing beautifully as Mary, and despite miscasting, reaches the emotional heights required in the final scenes, while British national treasure Jackson artfully conveys Elizabeth’s treacherous mind-set; “Win or lose my wager, I cannot lose the game’ is her analysis of her own dubious actions. Throw in a John Barry score, supporting turns from Nigel Davenport, Patrick McGoohan, Daniel Massey, Trevor Howard and future Star Wars star Jeremy Bulloch (Boba Fett!) and you’ve got a proper Hollywood historical epic in the traditional style, with a few choice lines resonating. ‘It is an unnatural thing for a woman to rule’ might seem like something from the past, but it seems that there’s still adherents today to such outdated, sexist thinking.

Reservations? Over the last twenty years, Scotland has had its own government-controlled film-production arm, Scottish Screen/Creative Scotland, set up under the Conservatives, then operated under Labour and now SNP rule. During that time, external productions have been welcomed, but any thought of Scots making productions which tackle their own history have been strictly verboten. Until Scots are allowed to have their own voice, we’ll be stuck with other cultures making their own version of Mary’s story. What’s surprising about this version is how lacking in local flavour this portrayal is; like Macbeth, it’s another story that we benighted Scots are simply not allowed to tell.

MARY, QUEEN OF SCOTS comes to Blu-ray for the first time in the UK, packed with extras and released by the BFI this week from July 11th. The release coincides with a BFI Southbank season celebrating the immense talent of actor Glenda Jackson, with screenings of film and television work spanning her incredible career. GLENDA JACKSON: THE ART OF CONVICTION takes place from 2-31 July.