Although Britain’s illustrious history makes it quite the place to go for ghost stories, it’s rarely been the source of modern supernatural scares on the screen; we think of classic Hammer horror as period pieces, but when these movies became too expensive to produce, the studio updated their thinking to late 1970’s settings. Director Lindsey C. Vickers was a graduate of the popular Hammer House of Horror tv series, and beyond that, his one and only feature was this neglected suspense-drama, which has only previously been seen on tv and VHS, but now gets a welcome blu-ray treatment from the BFI. The Appointment is an odd, not entirely coherent work, but obvious faults aside, it’s also something rather special, with a couple of stand-out, set-piece sequences which mark it out as a ‘must see’ for genre fans. 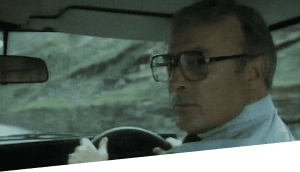 We open with an improvised scene; Vickers was told that US tv would demand a grabber from the outset, and came up with a simple but chilling opener in which a schoolgirl is abducted by supernatural forces in a most unexpected way. This scene is never fully connected to the narrative that follows, although it seems most likely explanation is that the unfortunate victim is a rival for the place in the musical school attended by Joanne (Samanthan Weysome). She’s the daughter of engineer Ian (Edward Woodward) and his wife Dianne (Jane Merrow), whose relationship seems to have become stale. Their differences are exasperated by their daughter’s petulant attitude to Ian not attending her graduation recital; instead, he’s got to travel up north to attend the inquest into the death of an employee (this film is somehow financed by the cultural mavens at the British Coal Board). Ian leaves home the next morning in a rented car, but he’s already disturbed by dreams of devilish dogs and a lethal accident, and it’s no surprise that Ian never makes it back home again…

The Appointment taps into a number of familiar tropes; the gifted child from The Shining, the vengeful teenager from Carrie, and the premonitions of Don’t Look Now and The Psychic. But Vickers is very much doing his own thing here, and the bland 80’s British-ness of his film has a unique, unsettling flavour. There are suggestions that Ian might be an abusive father, his lingering outside his daughter’s door has several possible meanings, although it’s also possible that she’s just a petulant brat with super-powers. There’s a deeply odd diversion into Final Destination territory in which Ian’s turning the ignition on his rented car somehow causes the death of a mechanic working on his real motor, and this connection is pretty much impossible to explain or rationalise even in a horror film. The suburban doom theme finally manifests itself in an extraordinary, absurd yet chilling climax in which a forgotten watch (gifted by his daughter) seals Ian’s fate.

Woodward’s other horror classic outside of The Wicker Man, The Appointment has built up a small cult if not urban legend status; it’s moody, slightly obscure and not for gore-hounds or sensation seekers. But it adds up to one of the most effective British supernatural movies, mainly because it’s not influenced by American tropes, and ends up somewhere in MR James territory. There’s a huge gap between The Appointment’s effectiveness and it’s lack of public popularity, and this timely blu-ray release should introduce it to fans old and new alike. And the moral of the story, not for the first time, is simple enough; don’t leave the house, at all, ever, under any circumstances.

Presented on Blu-ray in Standard Definition·

Another Outing (2021, 16 mins): Jane Merrow recalls co-starring in The Appointment ·

The Lake (1978, 33 mins): Lindsey Vickers’ eerie short finds young lovers choosing to picnic at a spot haunted by echoes of a violent event·

Newly recorded audio commentary on The Lake by Lindsey Vickers·

Splashing Around (2020, 18 mins): actor Julie Peasgood on making The Lake·