‘You’re in a house of desperate women here!’ says one of the characters in Jonathan Demme’s women-in prison (WIP) flick, and she’s not wrong. These are desperate women alright, but they’re also our heroes, gals in the slammer, fighting against the iron grip of a cruel, sadistic warden (Barbara Steele). Out this week for the first time on blu-ray in the UK, Caged Heat was taken on late-in-the-day circa 1974 by Demme, replacing a director fired by producer Roger Corman, but he did a bang-up job here; if you can ignore some of the traditional excesses of an exploitation film, there’s a lot here to enjoy if you can handle your action rough and ready.

‘I’m gonna knock your pretty little teeth so far into your throat you’re gonna get a picket fence around you’re a**hole,’ is a helpful piece of sample dialogue. This film is as linguistically abrasive as the locations are grimy to look at; fortunately Tak Fujimoto is on cinematography duties and comes up with some great shots. The heat that gets caged comprises of some lively talents, Junita Brown as Maggie, Erica Gavin as Jaqueline, and Roberta Collins as Belle; three women incarcerated amongst some of the healthiest looking inmates ever seen in a low-rent jail. Superintendent McQueen (Steele) has it in for them, and so once they’ve had enough of showers and yard exercise, the gals eventually bust out and head for the hills… 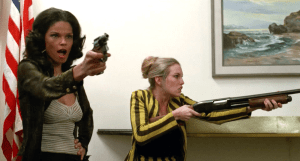 Much as one applauds the energy and dynamism of such low budget fare, it’s a shame that Caged Heat leans so heavily into finding reasons for the women to continually disrobe; the incessant nudity might have been what a largely male audience craved in 1974, but it’s somewhat problematic in terms of today’s viewing. There’s also a disturbing subplot about a predatory prison doctor (Warren Miller) which is handled in a casual manner that wouldn’t be on today; that’s exploitation cinema for you.

Demme went on to a storied career after his apprentice period working with Corman; The Silence of the Lambs and Philadelphia for a start. But like Coppola and Scorsese, Demme cut his teeth on exploitation fodder, elevating these texts to something that’s still worth watching today. Caged Heat is a seminal work in the WIP genre, and even if there are issues to be considered, it’s a strong, supple film that’s keyed into issues about woman refusing to be exploited by a male-dominated system, or women who enable that system.

Caged Heat is out now for the first time in blu-ray in the UK, released alongside Demme’s Crazy Mama (1975). Thanks to 101 Films for access.