Romola Garai has turned out to be quite a performer over the last decade, most notably in the impressive Michel Faber adaptation The Crimson Petal and the White, and she’s also the big draw on this perverse, occasionally arresting film from Lucile Hadzihalilovic. One of Earwig’s opening images is of a man pressing a glass to a wall; he’s earwigging, to use the common phrase, but there’s also a physical earwig in the film, kept as a pet in a makeshift miniature arena. And that about as much explanation as you get.

Garai’s character, Celeste, isn’t the main one here, but violent events may have as much meaning for a witness as for the participants, to quote the film-school maxim. Celeste is the witness to a strange duo, Albert (Paul Hilton) and a little girl Mia (Romane Hemelaers); the man is not the girl’s father, but is employed to replace her teeth several times a day. The girl’s teeth are made of her own saliva, extracted and then frozen into ice dentures, then placed back in her mouth…. 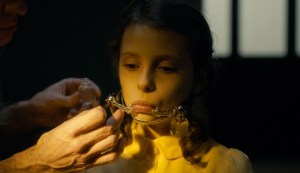 Inscrutably weird and without a clear moral or meaning; Earwig is also a film distinguished by several horrific scenes; Several critics mention ‘a shock’ but there’s several moments that require trigger warnings here, not least a glassing to a woman’s face, but also a ferocious depiction of cat strangling that I really wish I’d had some warning about. There’s also fractured time-lines, so it’s extremely hard to puzzle out who is doing what to whom; it’s all very murky by design, and one might expect an adaptation of an experimental novel (by Brian Cantling) to be.

Earwig follows the well-trodden path of public funded films screening at public-funded festivals with no real prospect of a break-out in sight; this is far too extreme for mainstream audiences, despite the considerable talent involved. There are some beautiful shots, and moments of mood have a hypnotic power;  Caro from quirky duo Jeneusse and Caro designed the weird saliva-apparatus, but Earwig is unlikely to find a similar cult audience. Earwig is often involving, and sometimes threatens to be iconic, but the lack of engagement or narrative development means that the puzzle is more attractive that the solution. It’s exactly the kind of film you’d expect from the partner of art provocateur Gaspar Noe; if you know his films, you’ll have some idea what you’re getting into here.

Earwig is in UK cinemas from June 10th 2022. Thanks to Anti-Worlds for access.