With Christoph Waltz just anounced as playing the director Billy Wilder in a new biopic, it felt like a good time to look back at one of the great man’s more neglected works. Wilder’s touch lasted longer than most, but eventually came and went; not all of his comedies sit well today, as only the very best in humour stands the test of time, but a surprising number of Wilder’s films still hit the spot.

One, Two, Three was a flop in 1961, out of step with public interest, but it’s now clear that it’s Wilder at his acerbic best. James Cagney plays C.R. MacNamara, the manager of the US Coca-Cola operation in Berlin, a city still divided into East and West. When his boss sends his daughter over for a few months, MacNamara rises to the challenge of keeping the girl out of trouble, but the day before his boss arrives to collect her, the girl vanishes, only to reappear married and pregnant. 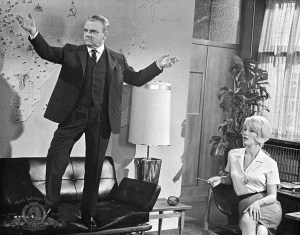 Despite a two-hour plus running time, One Two Three plays as a farce at breakneck speed, with Cagney ripping through his dialogue with real verve. There’s wonderful touches, like the secretary performing as a dancing girl to charm Russian businessmen, the vibrations of her dancing on the table causing a huge Communist portrait to fall off the wall, the photo of Khrushchev revealed to have been hastily plastered over an image of Stalin.

Modish references to John F Kennedy and the pop-music of the day are knowing but not overplayed. There’s a reason why Billy Wilder and screenwriter I.A.L. Diamond are regarded as all-time greats when it comes to wit; there’s an edge to the jokes about Germany’s past which, given that Wilder would later flirt with making Schindler’s List, indicate a pointed and political political point of view which might not have been right for that project. Musical score by by Andre Previn.