Canadian actor Mark O’Brien seems to be on the up and up; he was prominent in board-game black-comedy thriller Ready or Not and moody crime drama Blue Bayou. The Canadian actor stars as well as writing and directing this new psychological thriller which makes the jump from festival darling to streaming this weekend (June 10th 2022) in the US and UK. The title suggests some kind of gnarly horror like the similarly titled The Wretched, but The Righteous is something quite different from that; it’s more like a Harold Pinter play, but with a supernatural undertone that becomes overt in the final scenes.

Shot in austere black and white, this is a story of faith; father Frederic Mason (Henry Czerny) and his wife Ethel (Mimi Kuzyk) are mourning the recent death of their daughter. We get a brief glimpse of a sparsely attended funeral, but when the couple return to their Newfoundland home, several strangers come to visit. One of them is Aaron Smith (played by O’Brien) who seems to be injured, and gets invited into the family home by the father. But Aaron is not quite who he seems to be… 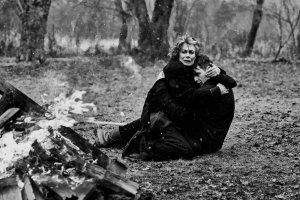 Is Aaron a vengeful spirit, or the Devil himself, or what? No spoilers are needed, because it would be churlish to reveal where The Righteous goes; it certainly maintains mystery and ambiguity for most of the 97 minutes. The conclusion is a little rushed, the second climax and the denouement seem to merge into each other, but a swift wrap up is no bad thing. Yet by then, The Righteous has crushed it in terms of creating a stark, doom-laden atmosphere, getting on point performances from a small cast, and offering a unique aesthetic; with their clothes and furnishings decidedly old-school, the couple seem to be living in a different century from their home-invader, and that visual clash gives The Righteous a unique feel and appeal.

The Righteous is essentially a theatrical four-hander, handled with some skill and giving the cast a real chance to shine; the mood is intense, and while Aaron’s arrival has echoes of The Birthday Party, Brimstone and Treacle or The Passing of the Third Floor Back, O’Brien clearly relishes the task of playing the interloper in a way that’ll give you nightmares. Horror fans with patience may well dig the outcome, but The Righteous has no gore or exploitation elements, and is worth commending to those who fancy an acting master-class; O’Brian, Czerny and particularly Kuzyk all spark their human drama to life in this intense study of the darker side of religious belief.

Streaming exclusively on ARROW in the UK and US June 10 : https://www.arrow-player.com