I was a bit beyond kids programmes by the time Chip ‘n Dale: Rescue Rangers came out, so aside from the insanely catchy theme song, don’t have any memories of the cheeky scamps now updated and featured in Akiva Schaffer’s new mix of animation and live action. So I’ll body-swerve any notions of comparison, and approach this as a Lonely Island film instead; Andy Samberg is clearly one of the driving forces here, working with fellow group member Schaffer, and while some may scoff, Chip n’ Dale: Rescue Rangers is not just for kids. In fact, discerning adults will find much to enjoy in this Roger Rabbit pastiche, which certainly offers enough gags and pop culture references to justify a deep dive into the Disney+ streaming service.

Chip ‘n Dale: Rescue Rangers isn’t the usual reboot; it’s quite the opposite, offering a withering commentary on the notions of franchises, sequels and animation generally. We establish that Chip (comic John Mulaney) and Dale (Samberg) have been riding high on the hog on the success of their tv show, but then go separate ways due to creative differences. Chip remains 2D flat animation, while Dale gets an augmented 3D CGI make-over. The two join forces to solve a mystery; cartoon characters are going missing, and the duo discover that they’re all being bootlegged; having their notable appendages removed and forced to make cheap knock-offs of their classic films.

Schaffer claims he didn’t want to include easter eggs and cameos unless they moved the plot forwards; fortunately, he doesn’t seem to have had many ideas that didn’t make the grade on both counts. We get the right tone early on with the introduction of Ugly Sonic (Tim Robinson) the human-toothed version of the popular hedgehog who was dropped from the first film due to negative public reaction. There’s also some sly gags about poor eye-line work, and Seth Rogen has a cameo as a badly animated Viking who suffers from the dead eyes of many Robert Zemekis characters. A list of the cameos here would be longer than the review; MC Skat Kat, Roger Rabbit himself, ET, Batman, live action Paul Rudd, the cats from Cats; the IP licencing department must have been burning the midnight oil to make all this happen, although crucially, this is all required for a very 2022 story about how IP changes with the times. 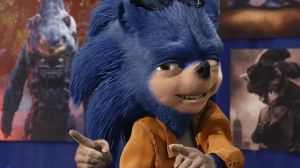 What’s crucial here is that Chip ‘n Dale: Rescue Rangers is probably the funniest film of the year so far, festooned with a plethora of great jokes and one-liners carefully crafted to Mulaney and Samberg. From the jibes about “non-brand specific cola’ to the ‘Coercive Insurance’ company, almost all the Tex Avery-style gags work, and there’s delightful moments such as Chip’s withering look at Dale as they drive around in their souped-up car. And the mix of 2D and 3D animation is a winner too, giving the film a fairly unique aesthetic. I had zero expectations of Rescue Rangers, but it’s a well-paced, clever, inventive movie that deserves a wider audience than just Disney+; taking risks looks pretty good when the risks pay off. Throw in a Post Malone cover of the iconic theme song, and we’re ready to rock! Ch-ch-ch-chip n’ Dale, Rescue Rangers!