The news that the Sonic the Hedgehog creative team are looking into reviving the classic Pink Panther cartoon character sounds rather promising; named after the jewel from the first entry in the Blake Edwards/Peter Sellers/ Inspector Clouseau franchise, the rinky-dink feline has been somewhat neglected over the last few years. By the time of the fifth film in the series, the pink panther now opens and closes the story as the star of a lavish animated insert, but the jewel is never mentioned at all.

Instead, The Pink Panther Strikes Again opens with a lengthy sequence detailing the trials of Inspector Dreyfuss (Herbert Lom) as he recovers in a psychiatric hospital from his obsession with Clouseau and the events of the previous four films; a visit from the famous detective immediately causes a severe relapse. The credits are themed around cinema, and suggest that Clouseau is similarly haunted by the pink panther; we see him in a cinema where the panther unsettles him as it pops up in various popular films including The Sound of Music, Cabaret and eventually Jaws. We then return to the UK circa 1976, where an even-more-cartoonish storyline has Clouseau investigating a kidnapping, while Dreyfuss goes full Bond villain, moving into a huge mountaintop castle and inventing a giant Doomsday death-ray which he uses to destroy the United Nations building in New York and blackmail the world. 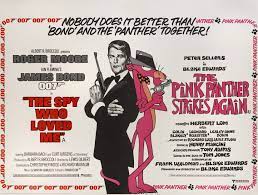 That synopsis suggests that we’re some way from the gentle parody of the policier that the first film offered; it’s a crowd-pleasing touch to remove the phantom, the Lyttons, and the jewel-thief padding and focus almost exclusively on the eternal enmity between Clouseau and Dreyfuss. The set-pieces are fairly lavish, with Clouseau disguising himself as the hunchback of Notre Dame, complete with an inflatable hump that carries him to safety when Dreyfuss attacks, or negotiating the various obstacles that an upstairs gym creates before he interviews some unsuspecting suspects. There’s a remarkable number of deaths, mainly due to a scene in which the world’s assassins descend, in the manner of John Wick 2, on Clouseau as he navigates a packed Oktoberfest beer hall. Best of all is the series of ancient sight gags on the theme of Clouseau breaking into Dreyfuss’s castle, slapstick which Sellers and Edwards handle with great skill and enthusiasm, and features a lovely, fresh Henry Mancini theme.

The Pink Panther Strikes Again wasn’t the most favoured by audiences or the creative team behind it, but it’s probably, laugh for laugh, the funniest film in the franchise. There are some sexist and racist overtones, as might be expected from a 1976 mainstream comedy, but it’s actually fairly light in that department. Despite a talented supporting cast including Omar Sharif, Leonard Rossiter, Dudley Sutton and Lesley-Anne Down, it’s really all about giving Sellers and Edwards a chance to indulge their penchant for elaborate yet simple comedy. It’s all killa, not too much filla comedy, and with a surprising emphasis on sex, which was even more pronounced in the novelisation that was mistakenly placed in the children’s section of my library as a kid. At ten years old, my notion of what any future romance might look like took the form of being Sellers and Anne-Down being fired through a brick-wall on a malfunctioning reclining bed while Kato attacks and Tom Jones sings Come to Me on the soundtrack, and I’m not sure it’s entirely changed since then.