Nicely timed to coincide with last week’s release of Father Stu, in which Mark Wahlberg and a remarkable physical transformation manage to tell a true story about disability, this BFI re-release of Fred Zinnemann’s 1950’s drama doesn’t have the same bells and whistles, but doubles down on personal angst. To that end, it’s powered largely by an astonishing debut performance from Marlon Brando, whose muscular presence adds a rather modern edge to this story of the trials of paraplegic war veterans.

‘I’m not a man anymore if I can’t please a woman,’ says Ken Wilocek (Brando) as he lies in a rehab ward; for that reason, he is keen to avoid the loyal attentions of his fiancée Ellen (Teresa Wright). Wilocek has retreated into goblin mode since his injury; Carl Foreman’s script has a light touch as we contrast Wilocek’s attitude with a diverse bunch of other men in the hospital beds around him. Sympathetic doctor Dr Brock (Everett Sloane) manages to spirit Ellen into Ken’s vicinity; there’s a wedding taking place on the ward that day, and Brock correctly surmises that our Ken will want nothing to do with it. ‘Before you can change the world you have to see it for what it is, without illusions’ are the doctor’s wise words, and Ken and Ellen both have a few reality checks to overcome. 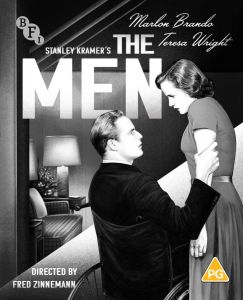 The Men’s frankness about sexual issues was ground-breaking at the time; ‘The wires are cut’ says Brando as he mocks Brock as a do-gooder Dr Kildare type, and it’s clear that Ken Wilocek’s sense of himself, and his own manhood, have caused him to retreat from the outside world. Ellen’s situation is also incisively covered ‘You’ve signed a contract to be his nurse for the rest of your life,’ is a key line that suggests how others might see her willingness to sacrifice her own ambitions just to be with Ken.

The Men also ahead of its time in tackling prejudice against the disabled, which is still a big thing to this day, despite our frantic virtue signalling of our social media. ‘They see what could happen to them and it makes them uncomfortable,’ says Ken, and he’s not far wrong. But The Men remains an important issue-based film; like The Best Years of Our Lives, it reminds us of the human cost of war but also investigates modern themes about alienation. And while the production is simple and straightforward, Brando elevates the whole film; looking great in his navy scrubs, Brando’s primal rage was rarely so well matched to the character he played, making The Men something of a groundbreaker in anyone’s book.

         Return to Action (1947, 19 mins): bricklayers, lawyers, teachers – disabled men and women are encouraged to retrain for new jobs in this short film produced on behalf of the Ministry of Labour

         The Undefeated (1950, 35 mins): released in the same month as The Men, Paul Dickson’s film charts the progress of a disabled ex-glider pilot through the rehabilitation schemes organised by the Ministry of Pensions

         Interview with Carl Foreman (1969, 82 mins, audio only): an in-depth interview with the award-winning screenwriter recorded at the National Film Theatre.