“‘The phone rings, in the middle of the night, my father asks ‘when you gonna live your life right…?'” The title, of course, comes from Cyndi Lauper’s 80’s classic of female empowerment via entertainment engagement, but that song was actually a cover, first released by Robert Hazard back in 1979. Lauper didn’t want her hit version to be involved with this daft cinematic spin-off, and so it’s not her vocals that’s used here. That’s not all that’s wrong with Alan Metter’s wonky pop-culture time-capsule, but it’ll do for a start; on three separate occasions, the song starts playing before we hand over to the vocals of Deborah Galli, and while her voice isn’t bad, it’s not the Girls Just Want To Have Fun we were all looking for.

Girls Just Want To Have Fun may not have what anyone’s looking for, but it’s got a lot that you would be ashamed to ask for; Sarah Jessica Parker and Helen Hunt play Janey and Lynne, two Chicago schoolgirls with a passion for dance; obviously this means the girls simply must compete at one of these new-fangled ‘Dance TV’ contests that everyone is talking about. Janey’s dad (the great Ed Lauter) has somehow been using military cargo planes to keep his daughter away from social distractions, and isn’t keen on her break for stardom, but learns to accept her gyrations on tv are good for the overall family mojo. 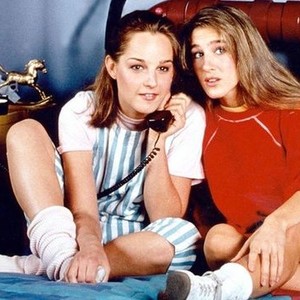 That parental conflict isn’t enough, so a script credited to Amy Spies (aka Janis Hirsch) goes off on a new angle; Janey and Lynne have a rich enemy in the form of Natalie Sands (Holly Gagnier) whose dad JP Sands (Moran Woodward) owns the bottling plant where the dad of Janey’s hunky dance-partner works. Rich people in this kind of movie are horrid, so the girls feel quite justified in inviting local punks (including punk icons Gina Gershon and Robert Downey Jr) to trash the Sands residence in the middle of a debutante party to a rabble-rousing, anti-authoritarian anthem that begins ‘You bring the Jack, I’ll bring the Coke…’ 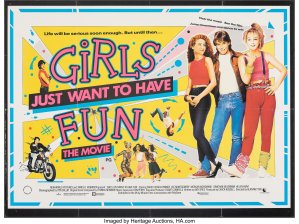 Yes, PG movies were a whole lot more loaded in 1985; there’s also plenty of sexual harassment included in this package, hideous leotards, some all-filla-no-killa tracks for the soundtrack album, and a general feel that this film would be out of date before it even hit theatres. Girls Just Want To Have Fun is still a popular song, but the film didn’t capture the same magic; it’s a reminder that there’s absolutely zero point in being nostalgic for any era that produced this.