Aliens! What are they like? We all want to know; are they watching us, or are they already here, getting involved with our daily activities? Documentary A Tear in the Sky aims to move the ongoing discussion forwards by answering these questions in a positive manner. Sure, there’s no end of hokey home-made docs about UFOs, or UAPs (Unidentified Aerial Phenomena) as we can them today, but Caroline Cory’s feature manages to plough a fresh furrow by mixing things up with scientists, military personnel who claim to have witnessed your actual spaceship action, and the venerable William Shatner, a recent rocket-man himself at the age of 80.

So what’s going on here? NASA and the US government have recently declassified a number of videos that can’t be easily explained; films like the US Navy’s ‘TicTac’ video of darting capsules have mystified many, and led to witnesses being ostracised due to need of others to rubbish their claims. Cory and her team of experts bring a wealth of fancy equipment to Catalina Island, Laguna, California, where they mount a rooftop vigil, hoping to catch a glimpse of extra-terrestrial manoeuvres over five days of intensive study of the night skies. And guess what? Much like the Falkirk triangle, where I live dead centre in the UK’s hotspot of alien sightings, Cory and her team find plenty of acrtivitiy in California and DO come back with something… 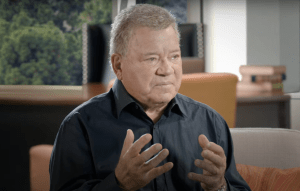 …but you’ll have to watch to find out! What Cory’s team find isn’t easy to explain, but if you want to think outside the box, it’s certainly evidence of a kind; even Shatner announces with enthusiasm that he finds the results ‘crazy’. But while it’s easy to poke fun, the idea that there’s someone else out there isn’t really that mad; it would surely be folly to imagine that we’re the be-all-and–end all of life in the universe, and Cory’s look at possible wormholes seems more credible than might have been expected.

Are there tears in the sky where alien craft, far beyond our technology, are sneaking through to have a swatch at us? Who knows, but A Tear in the Sky is a fairly absorbing 90 minutes for UFO buffs and Trekkies alike; you may not be ignoring your family to make models of mountains out of mashed potatoes quite yet, but those who want to believe will find plenty of original information here to be going on with…

A Tear In the Sky is out now for purchase on US streaming services including Apple+, Vudu and Prime, and via Prime in the UK.