My regular reader will know of my love/hate relationship with Robort Longo’s sci-fi action cyberpunk thriller Johnny Mnemonic; first sighted back in 1995, this really didn’t make much sense to me at the time. Times change, and I was somewhat surprised to find when I reviewed this last year to be a much smarter and better movie than I remembered. And when the trusted sources at 101 Films Black label offers up a new blu-ray, complete with a largely unseen cut of the film, it seemed like one more trip to the matrix-less-visited was required…

“I want a full restoration,’ says Johnny (Keanu Reeves) and indeed, that’s what we get; although this Japanese Director’s Cut is presented in SD, it’s still the best version of the story yet. Adapted for the screen by visionary writer William Gibson from his own short story, we’re taking a trip forward in time to the imaginable future of 2021, where mnemonic couriers transport information via the data drives in their head, although Gibson didn’t seem to second guess our urge to excess; the amounts of data Johnny carries in his head seem comically small. Johnny travels to Beijing to glamorous, erm New Jersey, with a ticking clock in the form of the knowledge that if his data isn’t extracted on time, Johnny’s head will pretty much explode with the pressure. This journey is more picaresque than the man-on-a-mission movie that might be anticipated, with a number of randos to be encountered including Henry Rollins as a bespectacled techno-geek, tougho bodyguard Jane (Dina Meyer), anti-establishment rebel J-Bone (Ice-T, of course) perennial futuristic personnel Barbara Sukowa and Udo Keir, and manic street preacher Dolph Lundgren and his visibly augmented body.

Bacjk in 1995, Johnny Mnemonic was easy to mock; Reeves was yet to nail the genre with the game-changing The Matrix, and the convoluted machinations depicted here were incomprehensible in a world where dial-up was barely a thing. But Gibson’s ideas win out; dystopian future ruled by corporations? Check. Virus attacking the unwary, affecting their nervous systems? Check. Meltdowns caused by the psychological cost of living in a digital world when physical existence feels exhausting? Check. Much as it pains me to say it, each viewing of Longo’s film makes it seem more prescient; if another new cut is unearthed, it’ll probably start with a shot of me searching my pockets for a mask before entering a socially-distanced super-market. 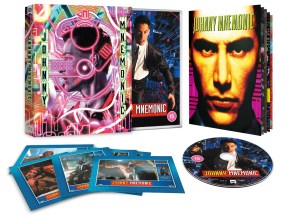 As well as commentaries and a relevant short by Gibson, plus the US cut of the movie for comparison purposes, this is the first chance for UK audiences to see the film’s Japanese cut, and if you have any interest in this film, it’s well worth the cash. The cutting makes much more sense, and feels more iconic from the opening credits onwards, and crucially, there’s a different score by the excellent Mycheal Danna which provides the emotional through-line to Johnny’s story that we’ve never had before. That’s not to say that Johnny Mnemonic never gets bogged down in tech-talk, it always does, but Longo’s experimental notions about depicting our future find an effective  realisation here. Gibson and Reeves have both been big influences on how we see what’s coming next, and Johnny Mnemonic’s journey from zero to hero is more prescient than ever in 2022.

You can buy this from…