U-571 was a box-office hit, a number one film in the US, but things went badly when it made land in the UK; questions were asked in parliament about the ethno-centric changes made to agreed history, and even the Prime Minister criticised the content. It’s true that it was British bravery rather than American bravery that managed to bring the Enigma coding machines back to Blighty without the Nazis knowing, but history regularly takes a beating in cinema, and with the Brits unable or unwilling to tell their own stories on film, the US not surprisingly took advantage of history being written by the victors. 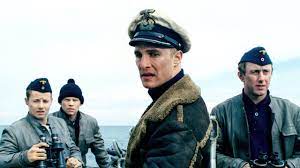 And so we have a WWII movie in which the Americans win by sheer force of manhood; they’re the most sizzling bunch of beefcake fictional sailors to hit the screen. Matthew McConaughey, still in the ‘who am I?” period of his acting, leads a merry band of Yanks including David Keith, Harvey Keitel, and, I kid you not, Jon Bon Jovi, to the site of a stricken German U-Boat. They manage to grab the vital machine while the Germans casually massacre the survivors, and manage to commandeer another U-Boat to safety. But with only one torpedo up the spout, and the German navy closing in, can the crew of U-571 escape to safety?

Since the Enigma story is now well-known from films like The Imitation Game, there’s little obvious tension here since the likely outcome is already established, but director Jonathan Mostow manages to engineer plenty of faux heroism along the way. It’s about as historically accurate as Raiders of the Lost Ark, but although screenwriter David Ayer later apologised for whitewashing the British effort in favour of a US fiction, it’s part and parcel of what cinema generally does to history; ie alter it to whatever floats at the box office.

U-571 is junk as history; as a mindless Saturday night action flick, it’s pretty good, with only a couple of regrettable CGI shots to break up some solid action sequences. Movies engage the interest, but they can’t all be primary texts; U-571 has some fanciful material that would upset Brits and Germans alike, but American audiences could and should lap up such propaganda; it’s made for them by them. When it comes to offering up a skewed view of history, nothing compares to U-571.