Not a remake of the 1978 Lee Majors tv movie The Norseman that I’d been hoping for, The Northman turns out to be the third feature by Robert Eggers, and one that’s eagerly awaited by serious cineastes with a taste for the outre. Eggers spawned a breakout hit with The Witch, which was an intense slow-burn that horror audiences seemed to adore, even if it took a long time to get to the expected supernatural conclusion. Occult beliefs also featured in The Lighthouse, in which Robert Pattinson and Willem Dafoe wrestled with some kind of malignant entity which may have been their own sexuality, mermaids, or both. From there, it was only a matter of time before someone gave him a wodge of cash and encouraged Eggers to express himself on a grand scale.

And The Northman is grand; Alexander Skarsgård plays Amleth, a Viking who seeks to revenge his father when his uncle murders Amleth’s dad and marries Amleth’s mother Gudrun (Nicole Kidman). Wait, what? Doesn’t this sound like the story of Hamlet, who seeks to revenge his father when his uncle murders his dad and marries Hamlet’s mother Gertrude? Of course, Shakespeare didn’t invent the story that Hamlet is based on, and The Northman seeks to trace a literary classic back to its roots in Norse history. So there’s tonnes of elements here that surprise; this Hamlet isn’t a scholar but a ruthless Viking who kills dispassionately as an automatic response to danger. Amleth throws his lot in with a big-cheese sorceress named Olga of the Birch Forest (Aya-Taylor Joy) as he seeks to bust apart the court of Fjolnir the Brotherless (Claes Bang) and revenge his father King Aurvandill (Ethan Hawke) as he seeks to ‘cut the thread of fate’ that binds them. 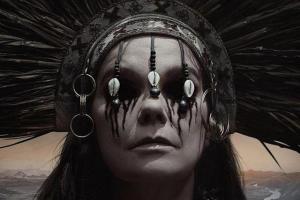 As the above synopsis describes, The Northman is an all-star fantasy epic, usually the formula for a good/bad movie in the mould of the Conan movies that are a point of inspiration here; you’ve certainly never seen such emphatic beheadings in your puff. But Eggers elevates everything with a steely grasp of narrative, great performances from a game cast, and a series of striking, Bruegel-esque images that shock and surprise. Taking inspiration as much from Tarkovsky’s Andrei Rublev as from any comic book, Eggers fashions a world of ravens, Valkyries, witches, volcanoes and Bjork as a seer-ess. Skarsgård was born to play this kind of muscle-bound, troubled hero, but Kidman in particular shines as his maternal adversary; she’s been on an upswing in film (Destroyer, Aquaman, Being the Ricardos) and tv (Nine Perfect Strangers, The Undoing, Big Little Lies) that defies the notion that women don’t get many good roles after they pass 50.

Eggers is a major, visionary talent, and even if his film doesn’t have the obvious commercial appeal of some other more user-friendly epics, it’s a beautiful, compelling and often fascinating film that tells a familiar story in an original way; The Northman is a mighty, nasty-ass epic of treachery, pagan horror and bloody revenge. No excuses will be accepted; seeing The Northman early, and in cinemas, is the only sensible option for those who love their films dark and dangeous….

Out now in the UK, only in US theaters from April 22nd 2022. See http://www.thenorthmanfilm.com