George Orwell’s novel 1984 is one of the key works of prophetic literature, worldwide and specifically in the UK. Written in 1948, Orwell looks to our potential future and sees bad things ahead; the accuracy with which he imagines the world of Winston Smith and Big Brother is the reason that it’s still essential reading for every teenager. But once you’ve got it, which is to say how Orwell’s anxieties about how government indoctrination via media might be used to crush the human spirit, every year that goes past makes the grim predictions of 1984 feel more relevant than ever. 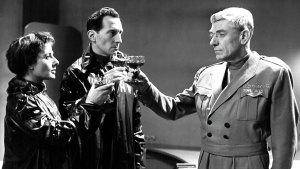 So the BFI’s blu-ray restoration of the original Sunday night play from the BBC is presciently timed as we huddle in our alcoves, bombarded with fake news and two-legs-good government propaganda, and with a war in Europe bringing death to our immediate doorsteps. Back in 1954, the broadcast of this play brought shock and awe, not just because of the torture scenes (2022’s The Batman reprises the rat in a cage affixed to your face) but because of a raw, depressing tone that’s scrupulously true to the book. This 1984 also has an ideal Winston in Peter Cushing, who plays him as a bookish, intellectual whose curiosity about what makes his society tick leads him to Pornosec and the free love he finds in the arms of Julia (Yvonne Mitchell). Clandestine trysts in a dubious antique-shop offer some solace from the endless geopolitical indoctrination that Smith’s daily routine involves him in, but in 1984, you can’t trust anyone, and so it proves…

Michael Radford’s film version, made and released in 1984, is probably a more fluid and stylish affair, illuminated by a brilliant decision to base the tech on that of Orwell’s day, but this humble BBC version, recorded live in a studio with filmed inserts, is a testament to the talents of director Rudolph Cartier and writer Nigel Kneale, the team behind the popular Quatermass television series. Kneale adds some details of his own about the Pornosec activities that ties in with the atavistic cultural themes explored in Quatermass IV, but generally keeps things faithful to the book, with Andre Morell a substantial O’Brien and Donald Pleasence weaselling around in the background. The influence of Pinter and Osbourne was yet to hit British theatre, and the characters announce themselves and their intentions simply and straightforwardly. Some of the dialogue and acting might seem stuffy by today’s standards, but the overall effect of this 1984 is still chilling and the crisp film inserts in particular look freshly minted. 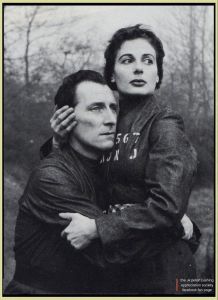 Extras include Andy Murray and Toby Hadoke offer up a well-informed commentary track, as well as giving a passionate 70 minute talk on Kneale, and there’s also an edition of Late Night Line Up which allows the cast to chat in the manner of DVD extras, plus a chat with a BFI expert about the various myths and controversies about the original broadcast. 1984 looms larger every year as the seminal text in understanding what’s happening to the world and how unscrupulous, immoral interests are attempting to destabilise the right to work of ordinary people for the convenience of the rich and corrupt. 1984 is a sobering, powerful work, and an essential purchase for everyone who hasn’t yet given in to the oppression of authoritarian doublespeak of the Trump/Putin cause.

Thanks to the BFI for advanced access. Order from the BFI Shop here: